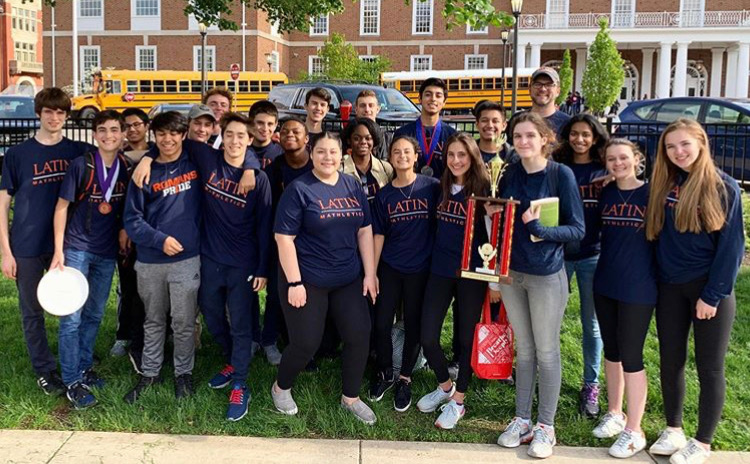 Eli Aronson
For many, math does not come easily. But at least twenty-one Latin student have strong enough understandings of it to represent the school on Latin’s math team.
On May 4th, the team made the trip down I-57 to the University of Illinois in Urbana Champaign with hopes of returning from the ICTM state math competition with a new trophy to add to its collection. Latin successfully got third overall in their small school division, excelling in several events. The events are categorized by grade level subjects such as Algebra 1 and 2, Geometry, Precalculus, Frosh-Soph, etc. Latin’s team finished top ten in almost every category, with individuals Avi Vadali, Tushar Patel, and Mark Miller all earning top-five recognition in their specific events. The team was able to place first in both the Junior-Senior eight-person event and the relay event—a victory complimented by the fact that it was Latin’s first time placing top ten in the relay at all. Coach van Benthuysen said, “The relay was a big point of emphasis at practice.” It seems their hard work paid off.
But perhaps the most exciting event was the Junior-Senior two-person team, comprised of sophomore Tushar Patel and senior David Hafner, making it a Soph-Senior team in this case. They advanced to the finals of the competition in a nail-biting contest that came down to the final question. Sadly, they were edged out by their competition, but they still managed to take second place in their division.
The mathletes admitted that they were pleasantly surprised by their victories. A member of the Junior-Senior eight-person team, Emma Beier said, “I was surprised, but I was super excited at the same time because I knew how hard everyone had worked.”
Sophomore Tushar Patel, who placed first in the Geometry competition, said,  “The victory was really great because I had worked hard to prepare, especially after placing third in Algebra I last year.” Next year, he hopes to defend his title and improve upon his personal score.
Overall, Mr. van was satisfied with the results, considering the team was missing some members who were attending the Scholastic Bowl nationals competition at the same time.  After getting second overall last year and third this year, he said, “My eyes are set on first place next year.” As much as the math team loves winning, sophomore Bianca Arriaga thinks the team is built off more than just trophies. “Math team helps underclassmen connect with upperclassmen that share a common interest in math,” she said. “Although it’s a competition, the activities are more about self-growth and challenging yourself than just winning.”