‘Invictus’ at the Student-Faculty Chorale 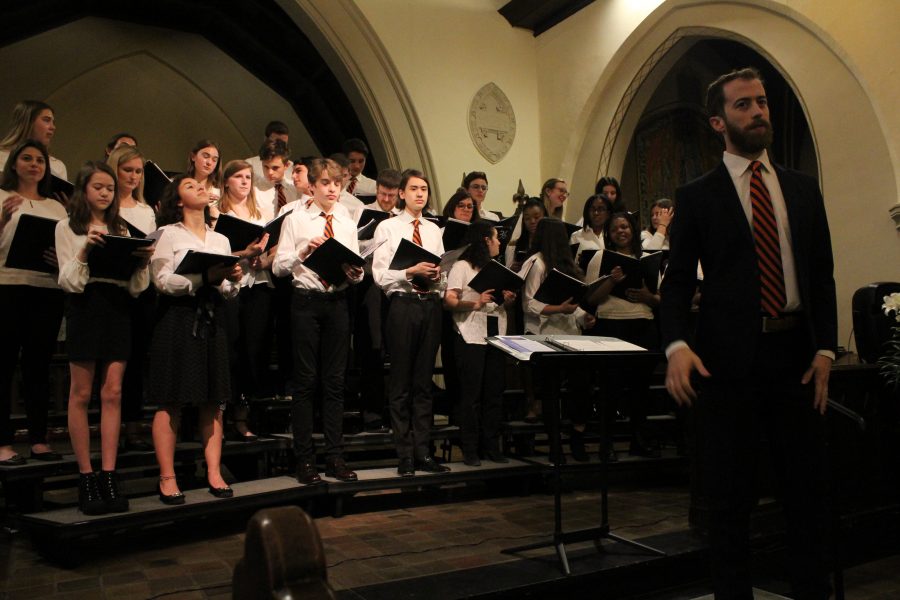 “My head is bloody,” sang the student-faculty chorus, as Mr. Dunn’s spoken poetry ricocheted around the walls of the St. Chrysostom church. It was a display of an emotional caliber that attendees of the annual Student-Faculty Chorale had not ever been fortunate enough to experience, especially after listening to the melodic and optimistic tunes that typically are featured in the event. The apex of the performance was, perhaps, the most surprising part, when the entire chorus joined together in a unified, blisteringly loud “Ahhhhhhh.”

The song, arranged by Scott Watson, was a mashup of the poem “Invictus” with a brand-new composition of music. Latin students know the poem well, as Mr. Dunn biannually presents it at gathering to encourage an attitude of perseverance and determination throughout the student body. Still, to hear small excerpts of the poem magnified against a background of overly stimulating music made it feel as though the poem was entirely unfamiliar. So, is the poem “Invictus,” after all, best in its unedited form?

The poem, at its root, is about action, which happens to be Latin’s theme of the year. So Mr. Di Gennaro, who organized and directed the Chorale, made sure to highlight action in the choir’s songs. As he said at the event, he selected “songs from movies, or ‘lights, camera, action’ songs, songs that accompany action, and, finally, songs that inspire action.” The choir was particularly in tune this year and masterfully sang through their agenda, which included songs like “Si Somos Americanos,” a Newfoundland sea shanty, and a polka.

But while the “Invictus” remix was intended to inspire action, many in the audience, upon hearing it, laughed. Mr. Di Gennaro, however, foresaw such a reaction: “Going into the concert,” he began, “I knew people were going to laugh, and I was okay with that because that is a normal human reaction when we are uncomfortable. Overall, I was very happy with how willing the chorus was to jump in and take risks with a song they had never heard before. It was rewarding to see a lot of parents come up to me after the night concert and, tell me how engaging and moving the piece was, and the variety of flavors in the song.”

Mr. Di Gennaro went on to explain the inspiration for the song, saying it was based on a similar mashup of Martin Luther King’s “I Have Been to the Mountaintop” speech that he performed with North American Premiere at the Symphony Center. “It was incredibly powerful,” he recalled.

Robert Lynch, a junior and member of the chorus, affirmed that “learning the song was a very lengthy process, but performing it, in the end, was gratifying, especially seeing all the pieces come together in the beautiful St. Chrysostom’s Church.”

Keely Moll, who also sang with the student-faculty choir, agreed, saying “I thought it was a success … the “Invictus” mashup was an interesting piece to do, and it was the first time we performed it, so we could only improve from there.”

Ultimately, the piece was only one part of an overall-successful Student-Faculty Chorale; both Mr. Di Gennaro and the choir members helped to execute another great performance.

Perhaps students missed the underlying message of the “Invictus” mashup, and they should have instead reacted in the same way as the parents who later approached Mr. Di Gennaro. Or maybe using “Invictus” in an experimental song that students were sure to laugh at trivialized the crucial message of the poem, and served to dull the impact it will have on students of the future.