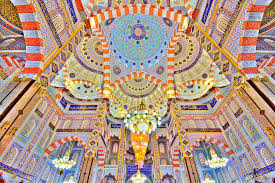 Olivia Baker
Co-Editor in Chief
A new club started at the beginning of second semester is a once in a blue moon phenomenon; an identity-based club started in the second semester, however, happens about as often as Halley’s Comet comes around.
So, when Freshman Elise Maajid and Noor Ahmed made an announcement about their new Islamic Club two weeks ago, the Latin community was rightfully taken aback.
“There’s not a really big Muslim community at Latin […],” said Elise about why she started the club. “I thought it would be a good way to meet other people who are Muslim and who can relate to you, and who can just like, talk about problems and good things, and talk about being part of the Muslim community.”
“Muslim students also fit into a lot of different categories, and I don’t think we don’t have one, collective race,” said Noor. “I really thought that a Muslim club would be a great way to pull people out of their respective corners and try to get them to talk about what’s underneath. I’ve never really been in a safe space like that, so I think it would be a really good idea for other people to have that safe space”
Their main impetus for the club was fascinatingly rational, to say the least.
“My purpose for starting the Muslim club was because I was annoyed that, during Ramadan, when we fast for a month, no one would really know about it,” said Noor. “And I was thinking like, basically not having food or water for a day and no one really realizing would be really annoying to deal with, so I thought that, what if people did know about it? And we got support?”
Elise added, “It starts May 5th this year, so it’s over the school year…”
Aside from electives like World Religions, Middle East, and Euro, however, religion is rarely discussed in-depth at Latin. As the sage, age-old saying goes, never discuss politics or religion in polite company. To Elise, that sort of apathy doesn’t change anything.
“I have been here since JK […] it’s very rare that we talk about [religion] because I feel like sometimes people will think it’s a very sensitive topic, and we kind of want to push it aside because we don’t want to be offensive […] but I think it would be better if we talked about it more and were more supportive,” she said.
“People are hesitant to talk about [religion] because they don’t want to say the wrong thing,” Noor added. “I haven’t been here as long as Elise… there’s a lot of openness to diversity, but not specifically to the Muslim community.”
As for concrete plans, Elise and Noor are still figuring things out.
‘This is still very much an idea,” said Noor. “It’s kind of like an idea that’s there, but you don’t really know what to do with it yet. What we kind of wanted to do is have meetings where Muslims and non-Muslims can come and sit in and discuss topics that they think are important to discuss, or just hangout and eat halal food— stuff like that[…] It doesn’t have to be incredibly serious.”
Nevertheless, Noor and Elise’s announcement caught the attention of several members of the community, non-Muslim and Muslim alike. For Sophomore Zemzem Mohammed, the announcement came as a shock.
“I didn’t know many others in the school who publicly practiced Islam,” she said. “With Muslims getting attention in the news these past few years, having members of our community understand the religion rather than only seeing the negative surrounding the religion wouldn’t hurt. Can’t wait to see what this club has in store.”
“I’m really glad this club is starting,” said Senior Annabel Edwards. “Having a safe space to talk about struggles, achievements, and Islam in general will be really good for Latin’s Muslim population. I think this will be good for the entire school, in terms of educating the rest of us about their beliefs and practices. We just never talk about it.”
The announcement also spurred a reaction from Rachel Sinar, who attends the only other religion-based club, Jewish Student Connection (JSC). She offers this statement of interfaith support:
“I think it really important for all groups to not only be represented but also to have a safe space where they feel comfortable talking about issues that pertain to their identity. Religion can be a difficult topic of conversation. JSC has provided that space for me and I’m excited that there is another minority religion club where community members that practice Islam have that same opportunity.”
Though the Muslim club is still in its “beta version,” as Elise puts it, the heads know one thing for certain:
“Anyone is welcome,” says Noor. “Anyone and everyone is welcome.”]]>