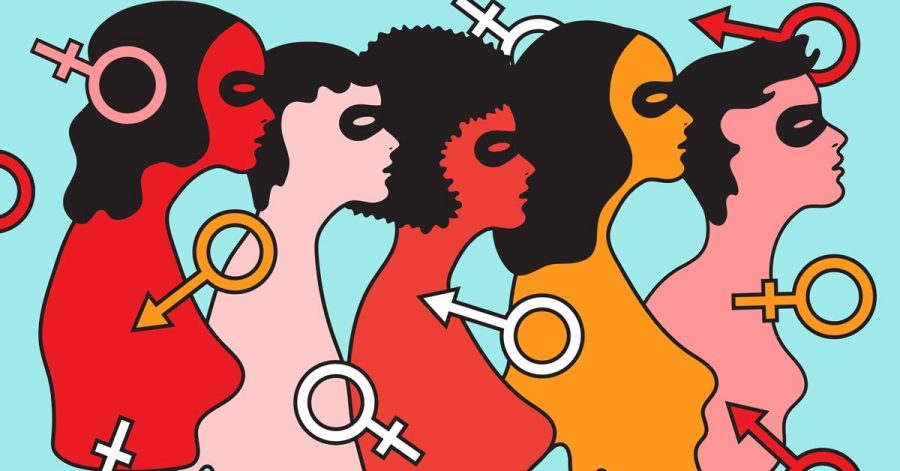 Bea Parr
On Wednesday, November 28th, members of LAW, YWOC, and GSM joined together to discuss a pressing issue in the Latin community: intersectionality, or the idea that various social identities like race, gender, and sexuality overlap and form a unique type of discrimination experienced by an individual .The meeting was closed to female and non-binary-identifying members to create a safe space for sharing private experiences. Before the meeting, LAW sent out an email with videos and news articles to educate its members on intersectionality — the word is often thrown around, but for many, its meaning still remains fuzzy.
During Clubs Block, the computer science classroom was filled to the brim with people; the desks had to be pushed to the perimeter just to fit everyone. GSM co-head Annie Goldenberg recalls, “I was very happy with the turnout of the meeting! Of course we would always love for even MORE people to come out, but it was so nice to see that many people interested in bettering their understanding of others and be so excited to learn how to support marginalized communities.”
Aoife Reynolds, a co-head of YWOC, agrees. “I was sincerely impressed by how brave YWOC and GSM members were to not only show up but how willing they were to engage in discussion,” she says.  Students chatted quietly amongst themselves, while the eight club heads rushed to move the desks and prepare to present the PowerPoint.
At the start of the meeting, the heads reminded everyone that “this is a conversation, not a debate,” as the meeting was designed to give students the opportunity to hear a variety of perspectives, not to press their own beliefs on others.  “I don’t think it was ever about changing people’s minds, because none of us are in a position to ask that of anyone. We just want people to be willing to listen and wanting to know how they can become better allies,” Aoife said.
The clubs then expressed the need for places like LAW meetings to feel more inclusive, as often times, people feel alienated due to the club’s lack of representation. Aoife explains, “YWOC, LAW, and GSM hosted the meeting to ensure all students felt welcome at LAW and that all parties could identify where intersectionality was missing, how to adapt its practices and learn about how we could all be effective allies.”
Annie Goldenberg emphasizes the hope for future inclusion, “We hoped that we could find a way to make LAW a space where more people feel comfortable going into. LAW has a reputation for being made up of white, cis-gender, and heterosexual women, and we are actively looking for ways to make LAW more inclusive.”
The heads hoped to address this problem by teaching allyship and a concrete meaning of intersectionality. Aoife points out that “YWOC felt that LAW was not practicing intersectional feminism but rather using the term intersectionality without understanding the extent of it.” The heads wanted to make sure the people knew that they weren’t in trouble, so to speak — there were just some areas in which they could improve. Aoife says, “We really tried to stress how this meeting was not in any way a slap on the wrist but an opportunity to grow as feminists.” To quote LAW co-head Lily Campbell, “There is no such thing as a perfect feminist, and we can all do better.” This meeting was to discuss exactly that: how we, as a community, can do better.
After going over the definition of intersectionality, students were numbered off and split into discussion groups. Each group was led by one or more club head, and the students discussed a variety of difficult questions about intersectionality, privilege, and allyship. The heads stressed the importance of letting all voices be heard and giving others the time to speak.
Unfortunately, this goal was not always accomplished. Annie said that while she generally felt like the meeting went well, she “would have loved it if more people spoke up or felt like they could share their voice with the group.” The conversations that people did have were valuable, as she went on to say, “I do feel like the conversations that people had might have opened their eyes to things they didn’t know about already or just gave everyone new ways to support one another.”
As she left the meeting, Sophomore Olivia Katz expressed that she was happy she went and left with a better definition of intersectionality. She pointed out that, “Learning to be an ally and how to support each others’ identities can create a more supportive environment at this school and in society in general.”
Ashna Satpathy was also glad that she attended, explaining that, “I learned a lot more about intersectionality and how it applies to myself and other people.” She expressed hope for a more inclusive future at the school, but pointed out that changes like these take time: “I think changing your actions in this way is a slow process, and this is the first step.”
Aoife feels that the meeting was a success: “I thought we made history. For the first time, YWOC, LAW, and GSM collaborated to create a shared space for so many different students. Everyone and I mean everyone, came with an open mind, ready to learn and listen. That’s all we ever wanted, and we got it.”
For more information on how to be an intersectional ally, see this link: YWC/GSM/LAW Intersectionality Workshop — What Now?]]>