Latin Goes to the Illinois Women's March on Springfield 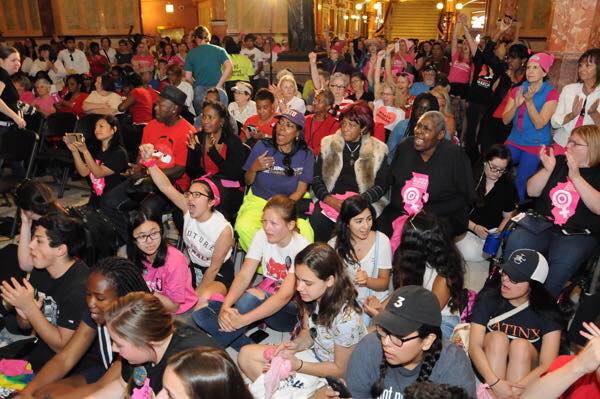 Margo Williams
On Tuesday, April 25, around 50 students were exempt from school to take a bus to the Illinois State Capitol to participate in the Illinois Women’s March on Springfield. Many of the Latin students that attended the march did so because they felt the opportunity was too great to pass up.
Amya Bell said that she “went to the march to become more politically and socially informed and engaged.”
Maddy Molina marched because she “was unable to attend the Women’s March on Chicago, [so when] this opportunity came up [she] took it.”
Iz Gius joined because “there are so many social and political issues unique to Illinois, and [she] liked the idea of a smaller, more local protest.”
While the march had an overarching focus on the Women’s Agenda, as Molina said, “I marched for my three sisters, my niece, my mom, all the women in my life, [and] I marched for intersectionality too. It’s often not talked about and it’s important to fight for all!”
According to the Illinois Women March on Springfield website, in addition to “the Women’s Agenda,” the march represented many issues, such as “the People’s Agenda of labor issues, issues including immigration, homelessness, criminal legal reform, the environment, LGBTQ, gun safety, health, economics and passing a responsible budget in Illinois.” Participants marched with the intention of advocating for a variety of specific legislation that is under consideration in the spring 2017 Illinois legislative session. They marched for a bill titled “HB-40” in particular, which was passed that Tuesday afternoon and now provides safe access to abortions in Illinois regardless of circumstance.
In addition to Illinois activists that spoke to improve Chicago transit, labor laws, and education, State Comptroller Susana Mendoza, Planned Parenthood Representative Brigid Leahy, three senators, and three representatives from the House spoke at the march on Tuesday. Grace Landsberg said that “it was particularly inspiring to hear Susana Mendoza speak because, while her speech was only about two minutes long, she seemed extremely enthusiastic about women’s rights and she made it obvious that, while she works under Governor Rauner, she doesn’t support every social decision that he makes and even works to counteract some of them.”
Many students left the march feeling impressed and empowered. Landsberg said, “Going to the march made me realize that it’s easier to get in contact with your state representative than you think. I definitely have a new appreciation for the difference that I can make as a high school student.” Gius also noted that “It’s easy to think of Illinois as only Chicago, and rural Illinois doesn’t really matter. But there were so many signs and protesters from counties that I’d never even heard of, who were so passionate about the same issues as me.”
Overall it seems as though the students that participated thought it was more than worth the extra work they needed to put in to rebound from their lost day of school, and would definitely attend a similar event next year.
]]>