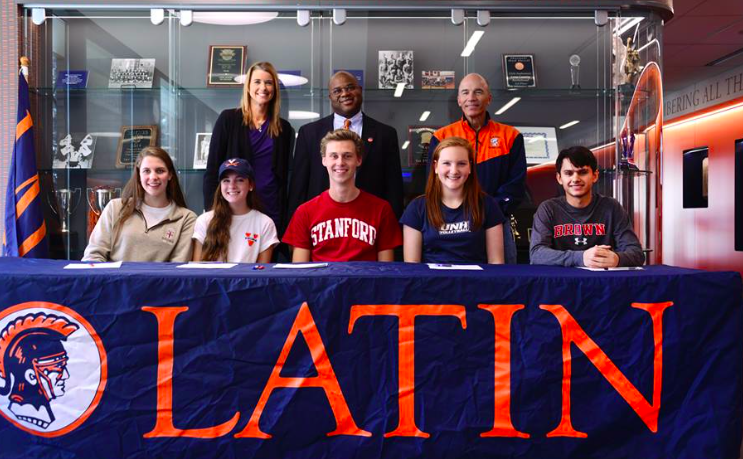 
This year, six seniors from the class of 2015 have signed commitments to play in Division I sports next school year.
Philip Demeulenaere will be spending the 2015-2016 school year at Brown University playing Squash. In last year’s season, Brown was ranked 18th in the nation; when Phillip joins the team, he and his 14 other teammates will play against other Ivy League schools, hoping to rise even higher in the ranks.
Joining Phillip at Brown will be Charlotte Rosenberg. Charlotte will be a part of next year’s Brown Bears swim team. After four years of swimming on the Latin School’s girls swim team and competing at sectionals and state all four years, Charlotte is excited to continue her swimming career at this strong Ivy League school.
Olivia Karas will be joining the University of Michigan Gymnastics team. Since 1990 this Big 10 team has won 16 Big 10 championships.
Alexa Markman will be joining the University of New Hampshire volleyball team. This year, Alexa, a captain of the Romans volleyball team, led the team to a 15-4 record, and they went undefeated in the ISL. University of New Hampshire had a record of 20-11 this year.
Will Nuelle will be spending the 2015-2016 school year rowing at Stanford University. Stanford University is ranked second in the nation. Will stated this was something he had dreamed about for “forever.”
Izzi Weiss committed to University of Virginia where she will join their rowing team. Izzi will join this 5th ranked team as their coxswain and will continue to wear orange and blue at the University of Virginia for the next four years.
]]>
Delete Image
Align Left
Align Center
Align Right
Align Left
Align Center
Delete Heading