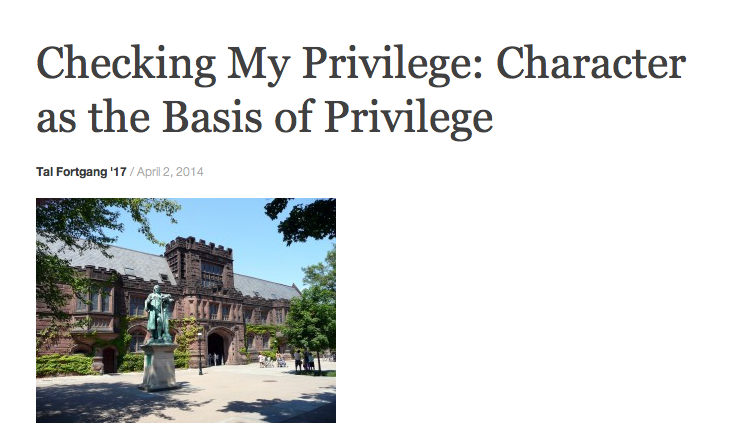 Since David Kim wrote an editorial last fall none of the other members of the faculty have done so; therefore, even though I am the advisor to the Forum and have usually tried to stay away from writing anything for the paper, I am going to do so now.

I assume that most of you have seen the post that was picked up by Time Magazine by a Princeton business major named Tal Fortgang. His argument was that since his grandfather was a Holocaust survivor, and since his grandfather made it and overcame the prejudice that faced Jews in the 1950s, nobody else should get “special treatment” and that he should not have to examine or be ashamed of his privilege. I suppose it could have as easily been a young woman, but Tal wrote the essay; therefore, I am going to respond to him as if he were one of the countless people with whom I have had these conversations in my office, or at Starbucks, or in the cafeteria.

Bro, I would say to him, you did not research your family heritage deeply enough.  People escaping the Holocaust had it the worst, no question, but you don’t have a clue what life was like for Jews in the 1930s and 40s.  Henry Ford was publishing the “Protocols of the Elders of Zion” and Father Coughlin was preaching that the Jews were conspiring to take over the world.  Jews could legally be refused accommodation at restaurants, hotels, resorts, and clubs, and while this seems like just fluff, those were the places where business often took place.  Discrimination often meant loss of livelihood.  Jews were kept out of schools, and hospitals had quotas that made it difficult for Jewish doctors to practice.  People with Jewish names found it difficult to find work unless they changed their names, and Jews often went into the closet in order to get jobs. Neighborhoods were restricted so that only gentiles could live there.  Consequently, if a person could not find a job where s/he lived, it made it difficult to find a job at all.  I could go on with the impediments that Tal’s grandfather’s generation faced, but if I were talking to him now, he would respond with a line such as, “See with all of that, my ancestors just worked hard and overcame it.”  But once again, Tal would have shown that he had not done his homework.

The reason that the Tal’s of the world don’t know what their grandfathers’ success was only partly a consequence of hard work.  The more important part was that non-Jews began to look at what we today call privilege but what they would have called unfairness.  Jews and non-Jews got together and created laws that made it illegal to have gentlemen’s agreements that restricted neighborhoods.  Good people realized that it was wrong to say that Jews could not live in any neighborhood they choose simply because of their religion, or as was the belief in those days, their race.  Laws were crafted to say that it was illegal to deny employment to good people simply because of their ethnic heritage or the place of their ancestry.  John Kennedy proved that the days of “No Irish need apply” were over.  There were still those who said that their faith demanded that they discriminate against the Jews because a thousand plus years of Christian tradition demonized the Jews as Christ killers who were damned for all time, but Vatican II changed that as well.

Centuries of Christian tradition could be overcome when good people recognized that Christ only wanted people to love each other as they loved the Lord.  Good people looked at their privileges and did not say we are being attacked for having privilege; rather they said, we have privileges and everyone should have them too.  Understanding privilege is not about attacking the person with privilege, it is about letting him or her understand that everyone deserves the same privileges.  A discussion of privilege does not focus on who has privilege, but rather on who is lacking it.  That should be the first rule of examining privilege, I would say to Tal, and the second rule is that you don’t lose privilege.  Privilege either remains in the hands of the few or it expands. Back in 1500 in England, the only people with the privilege of worshiping their God in an unmolested fashion were the Roman Catholics, but after nearly two centuries of burnings, beheadings, civil wars, and other disasters, the elites of England wrote a Bill of Rights that expanded the privilege of freedom of religion to all Protestants.  By the time we took it up in the 1780s, it was that government could not declare any religion to be better than any other, and today most of us think that everybody should be able to practice his/her religion, or lack thereof, without being molested.  Now what did those Church of England people lose when they allowed all people to practice their religion in peace?  Were they forced to stop going to their church? Were their churches shuttered?  Did they have to pretend to be something that they were not?  By recognizing their privileges and expanding them to others, they lost nothing while many others gained much, and the whole of society profited from different voices and different ideas.  Tal, I would say, just how good would America be today if your grandfathers had continued to be left out of the mainstream?

And Tal would now say to me, but that was then and this is now, and we have all the Civil Rights laws and a black president; isn’t it time we stopped giving them welfare and affirmative action.  You still don’t know your history, I would say.  Our grandfathers were allowed to use their G.I. Bill loan money to buy houses, and those houses were the start of the wealth they passed on to your father and mother and you.  Society still redlines where black people live and still deprive them of the loans necessary to improve their neighborhoods or to move elsewhere, and so their neighborhoods lose businesses and employment.  Jobs go off to the white suburbs and inner city unemployment increases.  Crime follows.  If there are no jobs, you do what you need to do to survive.  Add to that the war on drugs, and an entire generation of young men becomes either convicts or dead.  If the police waited outside Highland Park High School shaking down all the upper class boys there looking for drugs, they would have the same arrest record that they have in the inner city.  If every time they saw a white teenage boy driving a car and they stopped and frisked him, there would be as many white boys in jail as black boys.  That is just the tip of the iceberg as to how society is structured to block black people from advancing even with a black president.  Those structural blocks are what keep black people in check and those are our privileges.  We can still live wherever we choose, make stupid decisions and usually not wind up in prison or dead, and can drive without fear that we are going to be stopped and frisked.  We can go about our daily life without worrying that something is going to happen.

So Tal, you have a choice.  You can either be like those honorable gentiles who said, we have to treat the Jews as we want to be treated, or you can be like those gentiles back in your grandfather’s day who said, the Jews killed Christ and still need to pay for it.  As teachers, we can tell you what we believe is right, but you have to decide what you will believe.  I can give you all the evidence about racism, just as I can give you all the evidence about global warming or evolution, but I cannot make you believe it.  Now let me be a bit more candid, you do lose your special privileges.  You no longer get to have a monopoly over jobs when we expand privilege, and I know that in this job market, everybody wants whatever edge they can get.  The fewer people who are allowed to get a job, the better the chances there are for those who are allowed to get that job.  When you get infuriated at me for pointing out the privileges you have, you are really getting offended that I am pointing out the perks you get from having monopoly.

I know that anti-Semitism still exists; it is another type of racism.  It hurts and limits, but that does not mean that you cannot be helped by other advantages that we have.  You and I can exercise of our ability to use our right to have monopoly, or we can work to make sure that everyone enjoys the same rights and privileges. And here it goes back to the words that the gentiles of your grandfather’s world would use, fairness.  You can continue to play the game with the rigged rules, but if you do, what kind of a man does that make you?