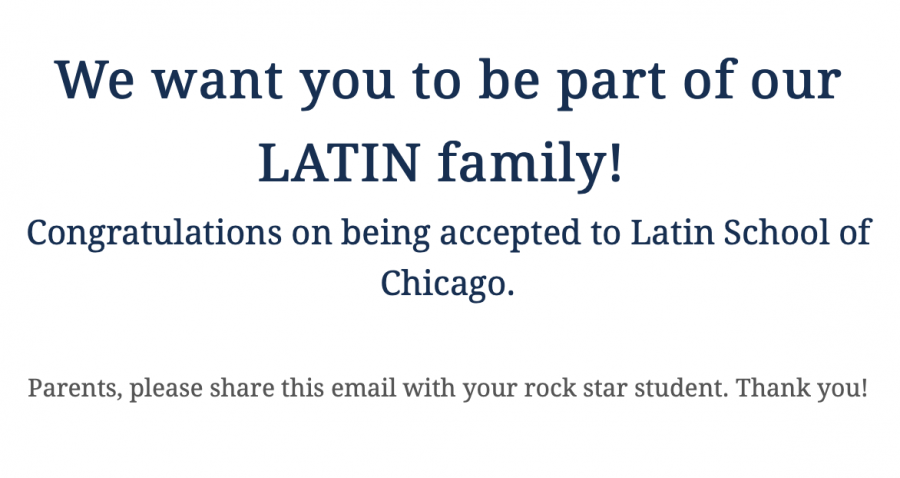 The 2020-21 admissions process at Latin continued to showcase Latin’s close community despite COVID isolating all students. Last year, Latin had a remote admissions process that consisted of Zoom informational sessions, self-proctored testing, and no shadow days. Regardless of this virtual nature, newly enrolled students pointed to Latin’s strong community as reasoning for their decision to become a Roman.

Latin’s holistic application process remained the same during COVID; applicants submitted their transcript and test scores, and participated in an interview, which all factored into the decision-making process. Latin’s Assistant Director of Enrollment Management Rachel Jacobson said, “One piece does not hold greater influence than the other.”

While the admissions process kept the same requirements, Latin implemented a few new online options. Applicants applying to Latin still had to complete the Independent School Entrance Exam from their computers at home through an online proctoring program called ProProctor, which included cameras to oversee test-taking.

Shiv Opal, a freshman at Latin who went through the admissions process last year at Gwendolyn Brooks Middle School in Oak Park, said, “This was a bit difficult, because it was something I had never experienced before.”

Taking the exam alone with an online proctor may have been an intimidating experience, yet it did not deter applicants from Latin’s admissions. Shiv said,“The admissions process at Latin really stood out.” He applied to Latin, Parker, and Lab, but after submitting his application, only Latin sent him a postcard back with a personalized message. Shiv said, “I felt like Latin actually cared during the admissions process.”

Latin’s admissions team, including Director of Enrollment Management and Financial Aid Mark Copestake, sought to ensure that applicants around the city still felt Latin’s strong community, even in quarantine.

“Latin is really proud to see students from a whole range of middle schools and surrounding suburbs,” Mr. Copestake said. COVID did not affect the diversity of applications Latin received, as this year’s new freshmen class came from 26 different schools across the country.

Freshman Natalie Arora, who came from GEMS World Academy Chicago, agreed with Shiv that Latin’s admissions process last year was superior to that of other schools. Latin held a socially distanced open house for prospective students to see the building and hear about students’ experiences. Natalie said, “It was nice to see the school and classrooms that I would spend my next four years in.” Natalie also applied to Chicago Public Schools, but CPS did not offer any open houses, which affected the decisions of applicants such as Natalie. “It was nice to have in-person contact,” she said.

Eric Keitel, the Director of High School Counseling at Bernard Zell Anshe Emet Day School, from which 11 new Latin students were accepted last year, added to the positive sentiment surrounding Latin’s admissions process amid COVID. “Latin continued to do the same excellent job they have always done—the only thing Latin changed was virtual events,” Mr. Keitel said. Every student that applied to Latin had an interview over Zoom. “Latin took their time with interviews and gave families a large amount of time to get to know them,” he said.

Just as Shiv felt appreciated by Latin’s outreach, many Bernard Zell families reported experiencing the same comforting feelings. “Families applying to Latin really felt cared for during the admissions process,” Mr. Keitel said. During this time of uncertainty, students had faith in their decision-making. He added, “Our families feel safe with the Latin education.”

As prospective students begin the admissions process this year and have the option of doing virtual or in-person tours and interviews, it appears that COVID will not affect Latin’s enrollment for the class of 2026. Mr. Copestake said, “During COVID, Latin continued to welcome new groups of wonderful families to the school, and we are hopeful and expect to do the same this year.