Take Us Back to the Ballgame – Please! 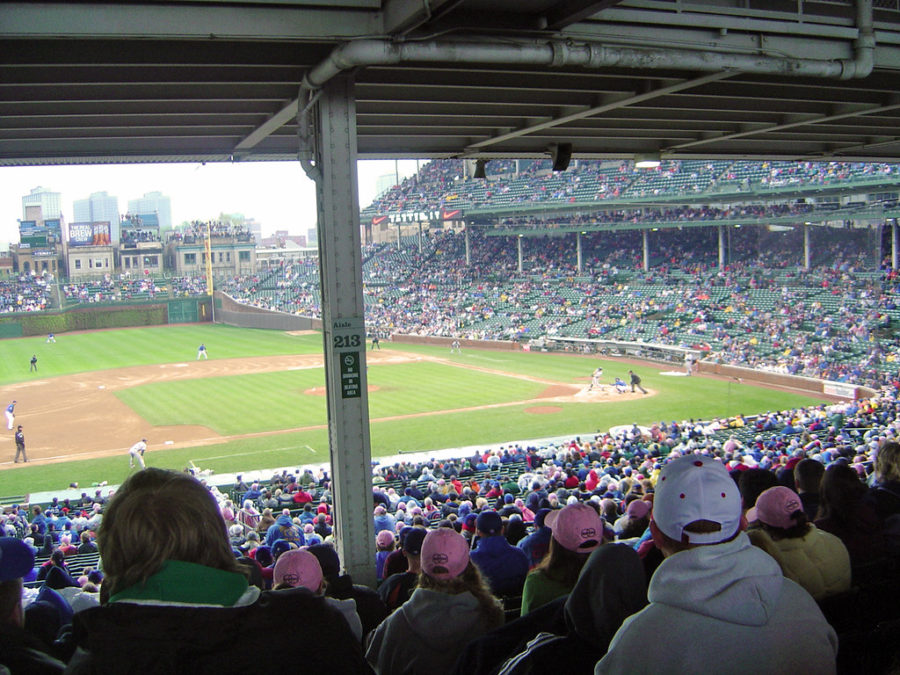 Whether it’s White Sox or Cubs jerseys in the hallways, signs on lockers, recounting top highlights from last night’s game, or discussing one’s teams’ superior stats in the stairwells, the rivalry and camaraderie between the two teams may be one of the biggest sports casualties of the pandemic. This year, springtime has arrived with more than rain, flowers, and birds, as baseball is blooming, too, and my favorite rivalry is back.
The Cubs and White Sox both made key offseason moves. The Cubs re-signed their essential starters—Javier Baez, Kris Bryant, and Wilson Contreras—to one-year deals. Their president, Theo Epstein, resigned, and the club hired Jed Hoyer to be his replacement. The White Sox, a team trying to compete for the World Series, traded for Lance Lynn, and signed closer Liam Hendricks to a three-year $38 million contract. Only time will tell which of these moves pay off.
One question on everyone’s mind these days: “Is it safe to return to the ballpark?” The White Sox and Cubs have many COVID precautions in place to help protect their fans. No congregating in the main areas of the stadium, all fans must wear CDC-approved masks, and mobile ticketing is in place to reduce unnecessary contact. Additionally, both stadiums are cashless.
To promote social distancing, stadiums have started the season at 20% capacity. Guaranteed Rate Field normally seats just over 40,000 guests; the number of fans will be limited to just over 8,000, with at least six feet between parties. Wrigley Field, which normally has a capacity of 41,374, will be allowed to host just over 8,000 fans.
Nurse Jill Yacu, an avid Cubs fan, said, “I think being outside at a Cubs or Sox game appropriately spaced, seated, and wearing a mask is safe, and it will get even safer as more and more people get vaccinated.” She added, “I am optimistic about the Cubs this year. … I think their bullpen is still pretty shaky, but I’m thrilled to have Arrieta back. I hope their bats get hot again this year—ever since 2016, they can’t seem to get the offense going.”
Spencer Gunning, a senior and Cubs fan, said, “I am very glad that fans are coming back and supporting our hometown teams. I went to a Cubs game last year on a rooftop across the street, and it was a little sad seeing Wrigley so empty, so I am super glad that fans are back. Go Cubbies!”
Eli Aronson, a senior and varsity baseball captain, said, “The Cubs are in a tough spot, because a lot of their players are on expiring contracts. So it’s a prove-it year for them.” On the White Sox, he said, “The White Sox are off to a bit of a slow start this year. I think that the White Sox are a team that is capable of making a deep run.”
The White Sox and Cubs have different outlooks on this upcoming season. The White Sox are projected to have the fourth best odds to win the World Series, and the Cubs have the eighth. While one estimate shows that the Cubs have a higher projected win total (85.4), the White Sox have a much higher projected win total in most other prediction models.
Whether it’s first row seats at a Latin baseball game or socially distanced seats at U.S Cellular Field, many fans can’t wait to safely enjoy the national pastime and maybe even move the traditional debate back from group chats into the hallways of Latin again.