Going the Extra Mile: An Unusual Year for Spring Sports 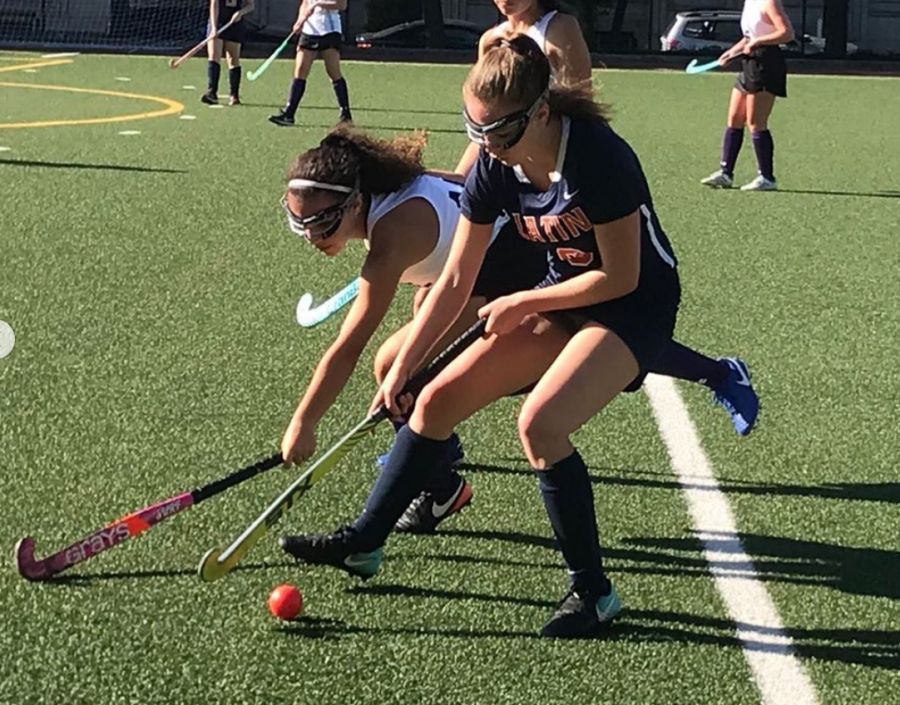 Image of Sabrina Hayes '22 in a game last year.

Girls field hockey and boys soccer are back underway at Latin. Both teams have started full-contact practices, and tryouts began on March 1.
The boys soccer team began practices at Chicago Indoor Sports, an indoor sports facility in the McKinley Park neighborhood of Chicago. Why practice at an off-campus location, about 20 to 30 minutes from the Upper School? The turf field was always either completely blanketed in snow or being used by another team. With the basketball season in full swing, both of the gyms are also booked through the Upper School’s closing time.
The off-campus location has caused some issues for the junior and senior players. Sophomore Ethan Mullens said that the commute was okay for him and his freshman and sophomore teammates. “It’s right after school. However, for the upperclassmen, it’s more difficult because they only have 20 minutes to get to practice on time.”
Junior and senior athletes learn remotely in the afternoons, meaning that they have to find a way to get to practice on their own. Junior Ascher Cahn said, “While I did have to leave right away to get to practice by 3:30, I still feel like the commute is doable.” Otherwise, the team seems to love being back on the pitch. Sophomore Cameron Woan said, “It’s really nice to see everyone again,” and Ascher added that with all the “changes this year threw at us, playing soccer felt super normal, which is awesome.”
Soccer practices will ultimately move back to Lincoln Park.
The girls field hockey team also began practices this past week. Back in October, while the field hockey team was participating in “contact days,” there were concerns about how previous players would feel about the influx of new players. Sophomore McLaine Leik offered an optimistic outlook on the situation, saying, “It will be more competitive to get on varsity with more girls in the pool, but the competitiveness is part of the fun of the sport, and what inspires people to improve.”
In a follow-up with her after the first week of practice, she still has the same optimistic and welcoming attitude, saying, “It’s not unusual to have a big group of freshmen trying out, but this year there are also upperclassmen who are trying out for field hockey for the first time, which is really exciting. I love that there is a big group trying out, and it shows that students are enthusiastic about field hockey and want to get involved in the team, which I think is amazing.”
The freshmen on the team also felt great about the practices. Ulla Ciaccio said, “I felt extremely comfortable, because the coaches weren’t cutting anyone, and the captains were so encouraging to everyone there.”
Overall, the girls seem to be very happy with being back on the field. Junior Matilda Taylor said, “The first few practices were super fun and I’m really excited about the rest of the season!”
While many athletes were relieved for the start of their seasons, others had some tough decisions to make. As the boys and girls basketball as well as the boys and girls swimming seasons come to a close, there is a small, two-week overlap between those seasons and the spring sports. As athletes can only play one sport at a time, they are faced with a dilemma. Both Cameron and Armaan Shah, sophomores on the boys varsity basketball team, had to make this decision. Cameron, who ended up leaving the basketball team for the beginning of the soccer season, said, “The decision was really hard, because I felt so welcomed on the basketball team, but in the end I decided that I had to prioritize soccer and couldn’t justify missing soccer for basketball.”
Armaan took the opposite route. “The soccer coach completely understands that I have to finish the basketball season before joining the soccer team,” Armaan said, which justified his decision to stay on the basketball team.
Overall, members of both teams are excited to be able to play this season and are not taking this opportunity for granted. Junior field hockey captain Vivie Koo said she is “excited to bond and grow as a team,” as well as practice and train together consistently. These first practices mark not only the beginning of the spring season but also a sense of normalcy for all of these athletes.