Biden’s Climate Plan: A Band-Aid on a Bullet Hole? 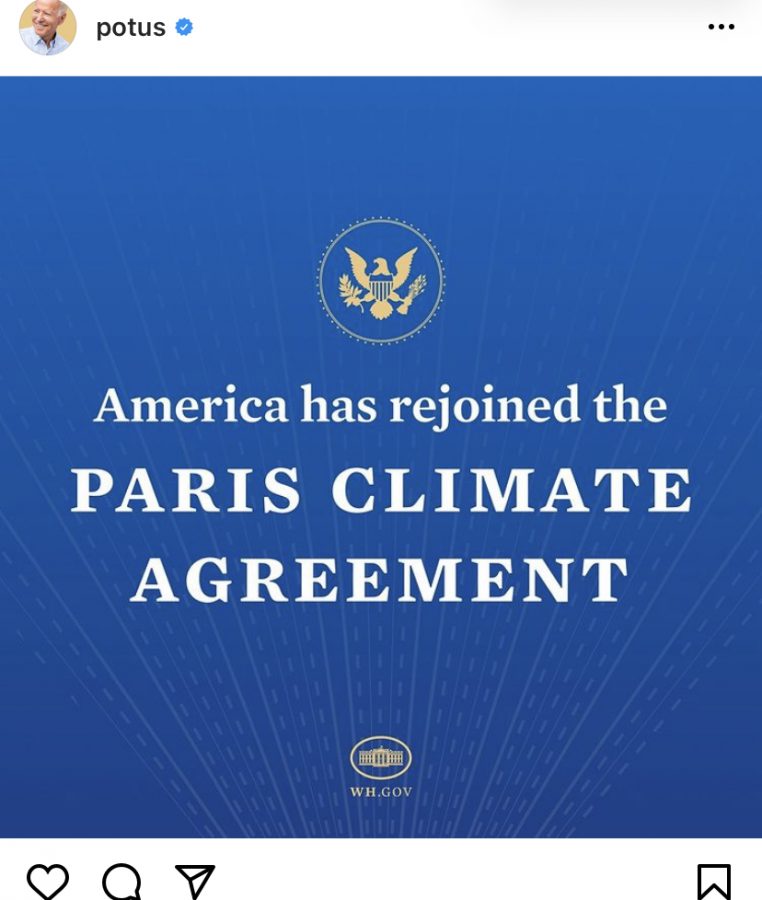 The climate crisis worsens with every passing day, greeting Americans with climate absurdities like the polar-vortex, causing snow in Texas. One of President Joe Biden’s biggest promises to voters was to combat climate change and environmental decay, all while stimulating the economy by creating new jobs in renewable energy to replace those lost by the fall of the fossil fuel industry. Over the course of President Biden’s first month in the Oval Office, most agree that he has followed through on that promise. On his first day as President, Biden signed multiple executive orders aimed at overturning Trump’s environmental policies, including one to rejoin the multilateral Paris Agreement.

Latin’s Green Group, formally known as the Green Club, held a meeting to listen to an episode of The Daily that outlined Biden’s climate plan and offered some political analysis on the subject. “A club member, (junior) Margot Bettman, had the wonderful idea to share it with the group,” said junior Keely Moll, co-head of Green Group. “We also find it important to discuss and stay updated with current events regarding our climate crisis because it helps us navigate how we can help our community become more green.”

The change necessary to achieve the goals set out in President Biden’s climate plan presents a daunting future for many Americans. The Daily podcast shared by the Green Group explained that the three main sources of greenhouse gases in the U.S. economy are pollution from cars, pollution from power plants, and leaking methane emissions from oil and gas wells. Some economists and politicians worry that policies to mitigate emissions from those sources could have disastrous effects on the U.S. economy, particularly for workers in those industries.

During the Presidential debates, Biden argued that his plan would produce more jobs than it would eliminate. However, the new clean energy jobs would likely be seeking highly skilled candidates who have previous experience in the clean energy industry—thus, the newly unemployed may not have access to those job opportunities. Nonetheless, it may be worth it: Americans are experiencing the negative effects of climate change in more ways than they might realize. “I thought it was really interesting to hear how much global warming seeps into our day-to-day lives not only by causing severe weather, but it also affects our economy and the price we pay for everyday items like food, gas, cars, and housing power,” Keely said on the content of the podcast.

One concern that came up for the club while listening and discussing the podcast was President Biden’s potential inability to pass permanent pro-clean energy legislation through Congress. Maya Gray, senior co-head of Green Group, said, “We all kind of agreed that he was moving in the right direction and he had good ideas but, obviously, when you’re doing things through executive order, it doesn’t apply once he’s not President anymore. So that’s like four years of climate-forward thinking.” The next President may choose to undo Biden’s policies, just like President Biden undid many of former President Trump’s executive orders.

President Biden’s most ambitious goals are to have “a carbon pollution-free power sector by 2035” and to “ensure the U.S. achieves a 100% clean energy economy and reaches net-zero emissions no later than 2050.” Amy Merrell, an Upper School science teacher, said, “I do think it’s achievable, but in order for it to happen, I think a lot more people need to be in support of it. I think it could happen if everyone, all local governments and companies are on board.” Considering the current political climate, that seems unlikely. A goal that far into the future, especially while Congress hesitates to vote for any permanent environmentally oriented legislation, is not so much a promise as it is a dream.

On a more optimistic note, a growing number of companies are making sustainability a priority, thanks, in part, to President Biden’s executive orders. Senior Wesley Eaton, one of Ms. Merrell’s students in Honors Advanced Biology: Ecology and Evolution—a class with an environmental focus—said, “With cars being a major emitter of carbon dioxide, huge car manufacturers like General Motors should already be moving towards producing electric-powered cars, regardless of if Biden’s policies become legislation. So, it should not matter to car companies, and other businesses that hasten climate change, whether or not Biden’s policies pass through Congress.” In fact, General Motors, a major player in the automotive industry, recently committed to producing only electric vehicles by 2035, vowing to eliminate gas and diesel cars from their assembly lines.

And yet, electric cars have their own arsenal of problems. Ms. Merrell said, “We need to make sure that big companies are not just doing it to boost their appearance.” Individual companies cannot be trusted, or expected, to turn the tide on climate change by themselves. When it comes to electric cars, “You still have to charge them, right? And so, where’s electricity to charge the car coming from? Is that coming from a coal plant?” The materials required to build electric cars are also far from faultless. “The batteries for cars also sometimes use non-renewable resources, so how are we building them?” Ms. Merrell asked. “Make sure that … there’s an actual impetus to change the whole company, and they’re not just throwing this out there to make them look good right now.”

“There are ‘downsides’ to moving towards using only green energy,” Wesley said, “like the cost and if it would be able to supply the world’s energy needs, but the benefit of being able to at least slow the effects of climate change would certainly outweigh the drawbacks.” He continued, “I am sure that the cost to changing to a ‘clean energy economy’ would be massive—or at the very least greater than continuing to use fossil fuels—but we will not change the course of climate change by staying idle or taking a slow approach.”

“Go big or go home,” said Ms. Merrell. “His goals are ambitious, but I think we’re getting closer and closer to this point where if you don’t have ambitious goals and we don’t make drastic changes, we may never be able to go back.”