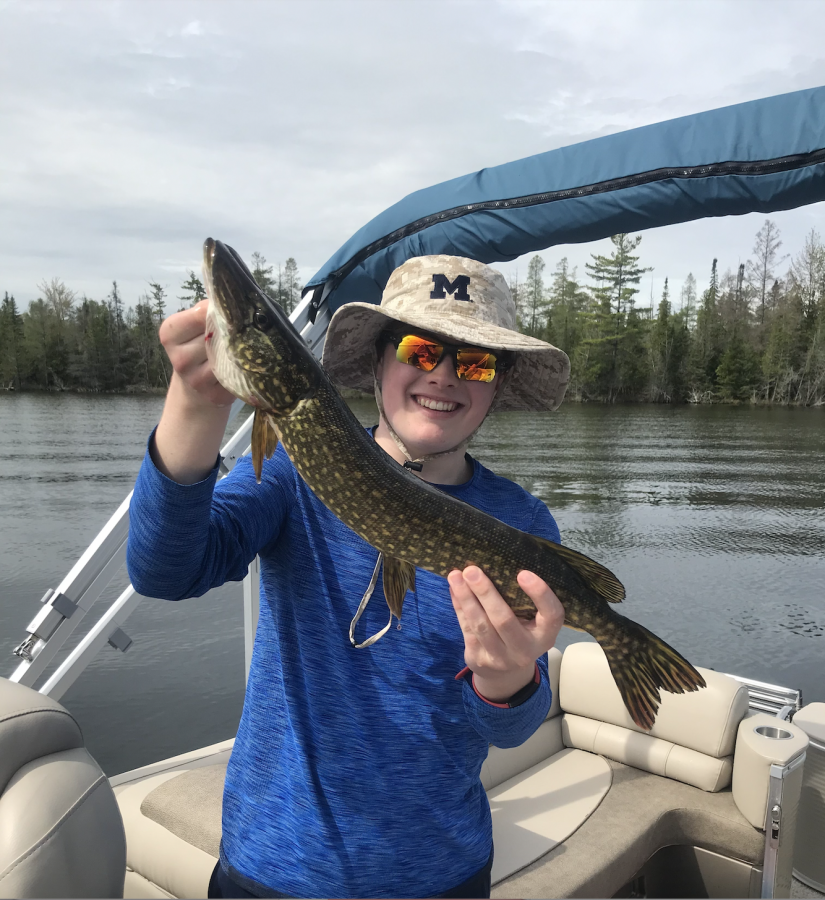 Perched atop a Michigan dam last summer, senior Timmy Devine felt his fishing line suddenly go taut—he had accidentally snagged a 20-pound salmon, hooked not by its mouth but through its spine.

The salmon had approached the dam to spawn, and was, therefore, about to die naturally. Timmy, in a moment of benevolence, had intended to extract the salmon’s eggs and give them to a nearby struggling fisherman for bait. But “snagging,” the method by which fishermen puncture the body of a fish with their hook (as opposed to the mouth), is illegal in the state of Michigan. And a Department of Natural Resources official was watching.

“She came down and grabbed all my stuff,” said Timmy. “And she was freakin’ livid. I could’ve gotten fined $1,000.” Thankfully, Timmy, with his beguiling smile and a little feigned inexperience, was able to talk himself out of any consequences.

Timmy usually avoids such criminal activity, however. In fact, he spent last summer volunteering at the Grass River Natural Area in Helena, Michigan to gather data on the health of its fragile forest ecosystem. “I tracked animals in the woods, and monitored all the different fish in the creek,” he said. “I loved it.” In addition to a diverse array of fish, the sanctuary hosts 400 species of plants, 49 species of mammals, and 147 different bird species.

On a typical summer morning, Timmy—who usually vacations in the Traverse City, MI area—wakes up at 5 a.m. and picks up his neighboring “fishing buddy.” After that, the two “drive a little pontoon boat through narrow channels in the lake, until finding the perfect fishing spot.”

“We kind of go for whatever species we’re feeling,” Timmy said. “Usually steelhead or lake trout. They’re harder to catch than bass, pike, and whatnot. I like the challenge.”

Timmy brings the same love for challenge to Latin’s varsity baseball team, on which he plays as an outfielder. “Timmy is a notable presence on the team,” said Spencer Gunning, a senior and pitcher. “He has a real desire to further the team’s success, and, more importantly, is a great friend who always has your back.”

“I met Timmy in preschool,” said senior and baseball captain Matthew Shrake. “Over the 15 years I have known him, he is still one of the kindest, most honest people I have ever met.”

Perhaps Timmy’s character can be attributed to the lessons he has learned from fishing. “Above all, fishing has taught me how to push my limits,” Timmy said. “It sounds corny, but it’s true. If you’re out there fishing for 10 hours, you might as well stay out there for another two hours to explore another spot, right?”

One day, Timmy hopes to reel in the elusive muskellunge. “I’ve never caught a muskie,” he said. “That one’s on the list. That would be absolutely glorious. You can go five straight days fishing exclusively for muskie and never catch one…” Timmy’s words tapered off. He looked down at his feet.

After a brief pause, Timmy said, “That’s a once-in-a-lifetime fish. But I’ll have my moment.”