The Social Dilemma: How Social Media and the Internet Connect and Divide Us 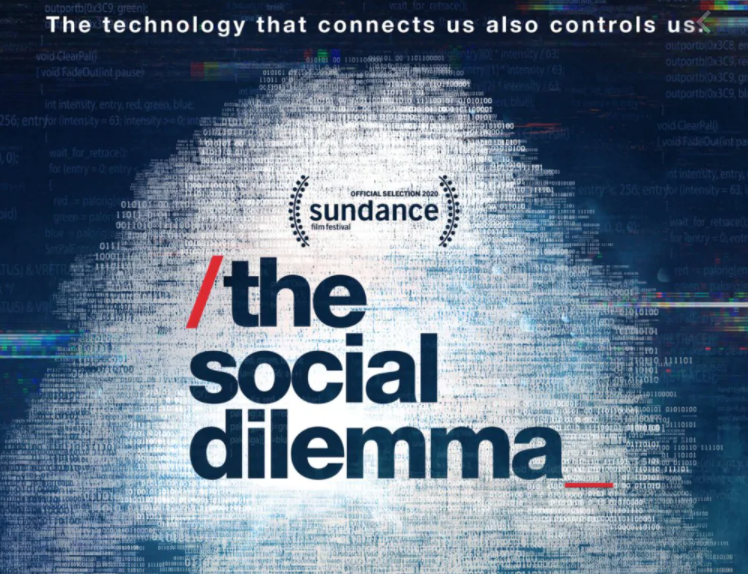 Movie poster for The Social Dilemma

The media has labeled Netflix’s The Social Dilemma “remarkably effective,” “downright terrifying” and “the most important documentary of our times.” The film analyzes the effects of the internet and social media platforms on mental health and societal divisiveness, all from the unique perspectives of people who worked for Big Tech companies, some of whom even invented these platforms.

Former executives and engineers at Google, Facebook, Pinterest, and Firefox, as well as Harvard and Stanford professors, blow the whistle on the tech industry, accusing tech moguls of benefiting from users’ screen addiction, declining mental health, and alienation that fake news generates.

Despite these controversial downsides, humans are moving toward an even more technologically-centered future, accentuated by a new dependency on tech that the coronavirus pandemic has created. With mental health in teenagers deteriorating, screen time skyrocketing, and divisiveness in the U.S. escalating into civil unrest, The Social Dilemma addresses a critical question: Is technology to blame?

Tim Kendrick, who teaches AP Statistics in Latin’s Upper School, has watched The Social Dilemma and studied the statistics of social media’s negative effects on mental health that are discussed in the film. He has been teaching for 18 years and says the statistical evidence coincides with his personal experience as a teacher. “The general trend among students has been for an uptick in stress and anxiety over the years due to the pressures and addictions that exist with social media,” he said.

However, the original purpose of social media was obviously not to increase depression and anxiety in adolescents; in fact, it was just the opposite. Justin Rosenstein, the inventor of the Facebook “like” button, explains in the film that he created this function to “spread love and positivity in the world.” But now, the button has an adverse effect, causing stress and anxiety in people if they deem the number of “likes” they receive inadequate.

Upper School counselor Jenny Stevens warns about the negative impact of social media. “By virtue of seeing people together when you’re not there, that feeling of isolation and rejection is real,” she said.

Sophomore Ellie Baker added, “Social media causes people to overanalyze every situation. While it has many pros, the cons are equally as visible.”

Not everyone agrees. Sophomore Spencer Stein highlights the virtues of social media, which allows for people “to connect with old and new friends. Some may say it makes young people have too much screen time, but it’s their responsibility to control themselves. It’s not on social media, it’s on us.”

The Social Dilemma goes beyond statistics and individual opinions of consumers to convince viewers why too much screen time is bad. The film goes right to the inventors of the very platforms in question. And the inventors’ main claim is that Big Tech’s business model is focused on profits generated by creating addictive and manipulative platforms, regardless of their effects on their users’ mental health. Sandy Parakilas, a former operations manager at Facebook, said, “We’re just zombies, and they want us to look at more ads so they can make more money.”

The individuals in The Social Dilemma blame much of the deterioration of mental health on the tech industry’s total disregard for their clients’ and society’s well-being. Tristan Harris, former Google design ethicist, said, “By prioritizing the success of your own business and company over what is good for democracy and seeing it fall apart before your eyes, I would say there is some immorality there.”

Shoshana Zuboff, a professor at Harvard Business School who was also interviewed in The Social Dilemma, said she thinks the immorality is grounded in seeing clients as “users,” not actual people. (As a telling side note, Edward Tufte, professor at Yale, said, “There are only two industries that call their customers ‘users’: illegal drugs and software.”)

When asked about how computer algorithms utilize user data, Ash Hansberry, Upper School Computer Science teacher, explained, “If a user likes a picture tagged about cats, then recommend them other accounts that are tagged for cat pictures. If a user searches for cars, then show them the ads you have related to cars. It only gets more complex from there, and there are nuanced algorithms that try to make more sophisticated predictions about users’ behaviors.” This simple tactic is the baseline for how many tech companies make money.

Aza Raskin, a former executive of Firefox and the inventor of infinite scrolling, put it in stark terms. “Advertisers pay for the products that we use, so advertisers are the customers. We’re the thing being sold.”

When asked about Pinterest’s business tactics, Tim Kendall, former president of Pinterest, said, “Let’s figure out how to get as much of this person’s attention as we possibly can. How much time can we get you to spend? How much of your life can we get you to give to us?”

The Social Dilemma also reveals the increasing divisiveness in the U.S. that is amplified by the growing presence of fake news targeted at specific people on social media, and how the internet is taking away our privacy, data, and right to free thought.

Tech companies “have more information about us than has ever been imagined in human history, Professor Zuboff said. “It is unprecedented.”
Ernesto Cruz, an Upper School history teacher who has studied the impact of propaganda in cultures throughout history, including Nazi Germany, said, “Fake news is propaganda. That’s what propaganda has always been. As Americans, we want to pretend that we’re better than `other’ peoples who fall for propaganda. So we’ve created a new term that’s softer and less judgmental.”

The main issue is not being able to distinguish between real news and fake news anymore. As Tristan Harris says in The Social Dilemma, if people can’t agree on what the truth is, society’s problems can’t be solved.

Mr. Cruz said he believes the solution to this problem is education. “Societally, we’ve removed critical reading, thinking, and writing education from curriculums. … We’ve politicized and demonized education in this country. We’ve lost sight of what it is to be educated, and how education happens.”

The Social Dilemma couldn’t have been released at a better time. A 16-month long Congressional investigation into Big Tech (Amazon, Apple, Google, and Facebook) has just concluded. The 450-page report written by the House Judiciary Committee’s antitrust panel concluded, “These firms have too much power, and that power must be reined in and subject to appropriate oversight and enforcement. … Our economy and democracy are at stake.”

No one knows exactly how the internet will impact the future of the U.S. or its individual “users”; The Social Dilemma offers an educated guess that raises alarm bells. But at this point, it seems the best way to combat the mental health crisis and divisiveness caused by fake news and other dangers of social media is by educating people on the pressing issues. Even if you don’t agree with the point the film is trying to get across, watch The Social Dilemma, simply to educate yourself. At the very least, you will be more informed about what is happening in the digital world around you—a start to solving this social dilemma.