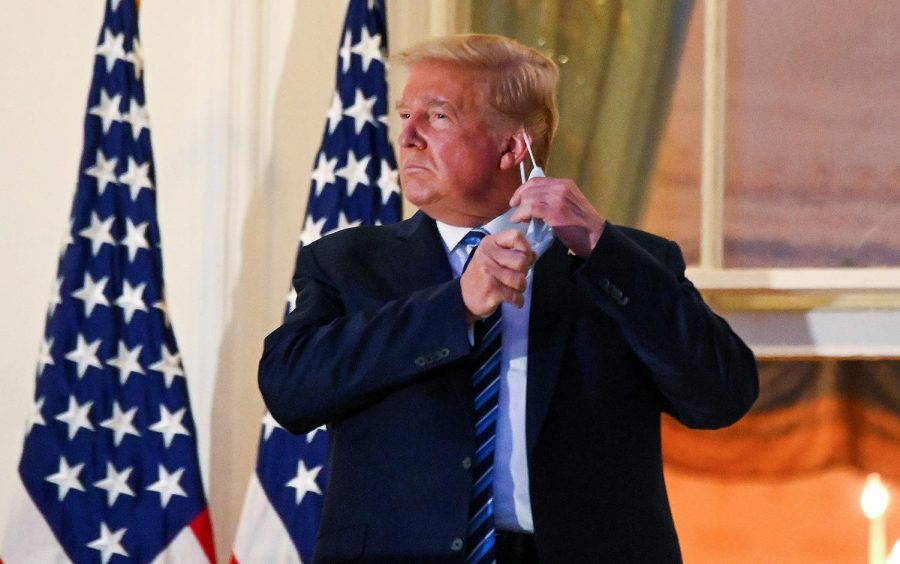 U.S. President Donald Trump pulls off his protective face mask as he poses atop the Truman Balcony of the White House after returning from being hospitalized at Walter Reed Medical Center for coronavirus disease (COVID-19) treatment, in Washington, U.S. October 5, 2020. REUTERS/Erin Scott

Latin’s Return to Learn plan emphasizes the importance of personal protective equipment (PPE) and contact tracing to limit the spread of the virus, but do the leaders of the United States follow similar COVID-19 protocol? President Donald Trump openly opposes masks, a key component of COVID-19 prevention, often mocking his opponent, Joe Biden, at rallies and debates for wearing one. Perhaps as a result of their not wearing masks, Trump, along with a few members of the Trump Administration including Hope Hicks and Kellyanne Conway, received positive coronavirus tests.
Pulmonologist and Latin parent Kristin Walter voiced her frustration with the White House’s management of the virus. “Clearly, Trump and other White House staff who were not wearing masks acted totally irresponsibly,” Dr. Walter said. “This behavior was frankly an invitation for the virus to infiltrate their ranks and also put White House journalists, Secret Service members and other people interacting with the White House staff at high risk of contracting this illness.”
Senior and Discourses editor Maeve Healy shared a similar response. “I, personally, am enraged at the fact very few people wore masks at Amy Coney Barrett’s Rose Garden event,” she said. “Whether or not rapid tests came back negative, false results are always possible. I think the White House needs to stop acting as if the virus doesn’t exist and follow the guidelines of the Centers for Disease Control.”
Latin alum Atman Satpathy ‘18, who recently participated in the White House Internship Program over the summer, discussed the interactions he saw among those involved in the operations of the Executive Office. “Obviously, people were very on edge, people were coughing into their arms and social distancing a bit,” Atman said, adding that people with symptoms would stay home from work, interns’ temperatures were checked, and most people cooperated with getting tested.
Clearly, not everyone followed the protocol Atman listed, given that Hope Hicks flew on Air Force One with the president and first lady while experiencing coronavirus symptoms. Atman also noted, “The only people really wearing masks were the older staffers there.”
Junior Sam Cutinho, a member of the Young Republicans Club, doesn’t see the president and the people who work for him refusing to wear masks as a big deal. “He’s free to do what he wants,” Sam said. “Nobody is required to wear masks in public, and they shouldn’t be. Personally I don’t wear a mask in public, but I wear it when it’s required.”
So, why doesn’t Trump wear a mask? Atman rationalized that for Trump, “It kind of takes away from the power of the presidency when you see the president masked.” He supported his theory by referencing how Abraham Lincoln hired fewer security officers than most during the Civil War, and Winston Churchill stayed in London rather than relocating to Canada during World War II, both putting themselves in danger to project strength. “I don’t know if that strategy’s working,” Atman said, “and I don’t mean to compare Donald Trump to Abraham Lincoln or Winston Churchill.”
At one of Trump’s rallies in Pennsylvania, Donald Trump mocked Joe Biden, his opponent in the presidential election, and implied that Biden needs to see a psychiatrist because, unlike Trump, he wears a mask. Trump said, “It gives [Biden] a feeling of security,” which supports Atman’s claim that Trump associates wearing a mask with safety, and, perhaps he believes that putting himself and others at risk by not masking himself displays a front of power. However, Trump clearly isn’t immune to the virus.
The recent question that emerged was whether Trump’s bout of coronavirus would alter his perspective on masks.
Trump wore a mask while in a motorcade after testing positive for coronavirus, but junior and Discourses writer Naomi Altman doesn’t condone his behavior. “The fact that Trump was riding around in a car greeting supporters with COVID-19 does not sit well with me,” she said. “He put his Secret Service staff at risk, and it was irresponsible behavior.”
Naomi adds that she’s hopeful, yet wary, of a change in Trump’s perception of masks. “I hope that this will change his beliefs about masks, but I am doubtful that it will happen. To be honest, I feel as though he has it coming. Not wearing a mask and holding huge rallies will catch up to you.”
Within hours of release from hospitalization for coronavirus at the Walter Reed National Military Medical Center, Trump showed little change in perspective. “The fact that Trump pulled off his mask upon arriving back at the White House after his hospitalization shows that he has learned nothing from his experience with this potentially deadly virus,” Dr. Walter noted. “It really is a travesty and a tragedy.”