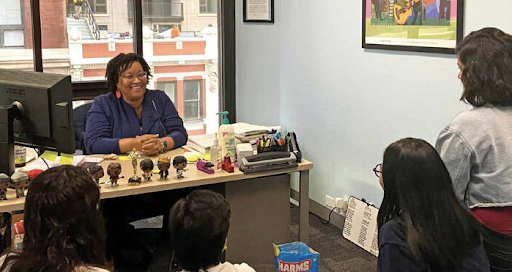 “Together,” Latin’s theme for the 2019-2020 school year, describes a sense of unity that the community strives to create. Sometimes, however, Latin’s leaders find that connectedness can be best achieved through separation. But does division serve to educate and support… or does it reinforce segregation? The murder of George Floyd, on the coattails of murders of many other unarmed black men and women, followed by a wave of nation-wide protests, has tested the abilities of Latin’s student body to remain cohesive.

In response to current events, Latin’s faculty arranged a community conversation for students to discuss recent events and racism at large. While the purpose of the meeting held in early June was to bring the community together, after a brief introduction with all attendees, teachers chose to conduct the majority of the gathering separately, with students of color in one group and white students in another. The group of eighty-some students, teachers, and administrators then reconvened for a short recap of each group’s conversation.

While some students questioned where they fit within Latin’s dichotomy, every student and faculty member interviewed displayed a sophisticated understanding of why the school chose to separate, voicing united support for education about racism and creation of safe spaces over blanket togetherness. In essence, they were together in their reasoning that community and equity might best be built through separate forums.

Latin’s Director of Diversity, Equity and Inclusion, Eleannor Maajid, explained one of the reasons for this separation.  “Being the minority, in numbers, in a situation, can be overwhelming,” she said. “It can be really hard for students to process their own feelings while they also have to process the feelings of the people who may not have a shared experience with them or may not be able to understand their perspectives.”

Rising senior Alessandra Kaestner, who identifies as half black and half white, agreed with the decision to organize a partially separated dialogue. “When you have a mixed group, with white students and students of color, you will have a conversation that has less of the emotion behind it, which is fine and you always need to have that conversation,” she explained. “Many people at Latin are really educated and well informed on these subjects, and I think everyone does a pretty good job navigating them, but when we are able to talk with people who we identify with, you get another sort of understanding and level of emotion that isn’t there with other people. It’s easier to let your frustrations out because the people that you are talking to really understand.” Rising Sophomore Ayanna McCarthy, who identifies as African American, agreed with Kaestner, but also shared, “I think it would be better if we were a whole, because it is still a whole issue as a community, rather than just one race.”

Rising senior Zemzem Mohammed, a co-head of Latin’s black Student Union, also stood by the school’s decision. “I like that Latin is having the conversation with the student body to begin with,” she pointed out. “Having them be separate initially with people who identify similar to you and possibly share the same feelings can really help people gather their own thoughts.” It is important to note that Latin also held a discussion for it’s black students only, separate from other students of color. Mohammed said that “having that space for only black students and faculty is very important and luckily it was done a few days ago.”

Many individuals present at the meeting identified as white; their section was specifically designed to explore how white students may use their identity and privilege to combat racism. Upper School Diversity Coordinator, Kate Lorber-Crittenden (L-C), who has organized white, anti-racist affinity spaces for faculty and students at Latin, defines affinity as any shared identity and explained that “the white folks, myself included, we grew up in spaces where we don’t really have to think about our racial identities, and then we are kind of taught that it is actually bad to talk about it. So when we enter a space where people across racial identities want to have a conversation about race, everyone in the room is coming into that conversation at a really different point and a different understanding about how race has impacted their life experiences.” Ms. L-C emphasized the importance of understanding how one’s identity affects her everyday life, before she engages in cross racial talks. She explained that white people need to take responsibility for their own education about issues related to racism. “If we really want to build community, we can’t always ask other people to share more about themselves and be more vulnerable.”

Rising senior Vivi Kaufman, who identifies as white, has attended Latin’s white, anti-racist affinity and was able to share the space’s importance. “Having conversations with only white individuals allows us to talk about these important issues and educate ourselves without putting an unnecessary burden on people of color to educate us or share their personal trauma,” she noted. “Also, I think many white people have a legitimate worry or concern about speaking over people of color or unintentionally invalidating their feelings, so by initially having separate conversations, everyone is given a space to share their thoughts in a lower pressure environment.”

Freddi Mitchell, a white-identifying rising senior, has been a leader in discussing white identity at Latin and made clear one of the main purposes of the white affinity. “The anti-racist affinity is to do what is in its name: be anti-racist and use our privilege to help,” she stated. “I like the space because my peers in it challenge me to be better. They challenge me to use my privilege to speak up: something all white people should be doing right now.” Regarding the recent community conversation, Mitchell firmly stated that “it should not be a conversation filled with defensiveness or denying the privilege we have.”

Maya Gray, a rising senior who, like Kaufman and Mitchell, attends the white affinity, mentioned one disadvantage of separated conversations. “In [white] individual discussions, we will be missing the perspective of people who can understand the rage that is fueling these protests,” she said. Rising senior Quin Kies, who identifies as white, noted that just as the conversation was only partially separate, “the goal is not to separate ideas forever, but to have a space where we can safely convey ideas and construct opinions.”

Another complexity of the choice to divide students into two groups is the diversity within Latin’s students of color. Just as black individuals have vastly different experiences from white people, so do Asian or Hispanic identifying students. Rising sophomore Amanda Valenzuela, who identifies as Hispanic, recognizes the benefits of being able to speak with only students of color. Still, she said, “I don’t think it’s fair to be combining everyone as if everyone has the same struggles right now. It’s important to be able to discuss how it affects you and the way it presents in your Hispanic household.”

Rising sophomore Alena Brandt, who identifies as half Asian and half white, faced a different issue. “Having two groups to choose from makes me feel a little bit like an outsider,” she disclosed. “I feel I wouldn’t be able to fully fit into either group, not because of the behavior of the people there but because I do not fully experience the pros and cons of either race.” While Brandt did not attend the community conversation, she explained, “I honestly don’t know which group I would go to. Since I do not resonate strongly to either part of my racial identity if I had the opportunity I would want to hear both conversations. This is because the Asian side of me feels some of the disadvantages of racial minorities while also feeling and experiencing white privilege.”

While it seems especially important now more than ever that students of color have a space to elucidate their perspectives and emotions with people who may have similar experiences, it has been Latin’s practice to consistently create that outlet. Ms. Maajid’s office has been a long-standing safe space for Latin’s students of color, though Ms. Maajid is clear that her office is open to everyone, and although it may seem to separate students of color from white individuals, the office is essential to many students.

Kaestner shared that “Ms. Maajid’s office is a place where you can breathe again… and more so be yourself than you were in other rooms. A lot of times, people don’t realize that they are holding back, but I think that going into Ms. Maajid’s office releases a certain level of comfort that you sometimes don’t have when you are around other students at Latin.”

Ms. Maajid explained that “students of color don’t always have the same experience as their white peers. They can be in a class … where they don’t have the opportunity to look around and see people who look like them all the time, as opposed to white students, [who] in any space are always going to have people who look like them [and] who possibly have a shared experience.” As a Latin graduate, Ms. Maajid said, “I know what it was like to be that kid who was surrounded by folks and didn’t have a space where I could go and just be with folks that looked like me, I had to create that space for myself. To be able to create that for the students [today] is so important.” Ms. Maajid spoke of the room’s personal significance to her today, and shared that “[these] are the times I need people who I feel can relate to what I’m going through or what I’m dealing with. [These] are the times where I am so glad I have this space.”

Apart or together, students emphasized the importance of white students using their privilege to fight racism. So how can white members of the Latin School community be effective allies? Mohammed explained that “the Student Diversity and Equity Committee hosts wonderful workshops on how to be an ally or any other issues that need to be highlighted. I urge everyone to attend a few workshops next school year. Educate yourself and don’t be afraid to ask questions.” Ms. Maajid shared the voices of some students of color that really stood out to her in the community discussion. “It is one thing to say you are not racist… but it is another thing to be actively anti-racist… to say I am going to work my hardest to be anti-racist and to speak about the things that I see. Be able to call out your friends if you see them doing something inappropriate or wrong. People tend to stay with who they feel comfortable with, so step out of feeling that [comfort] and actually try to do something that is not like what you would normally do.”