Mr. Kanai Arrested, Held in Jail for Standing Up 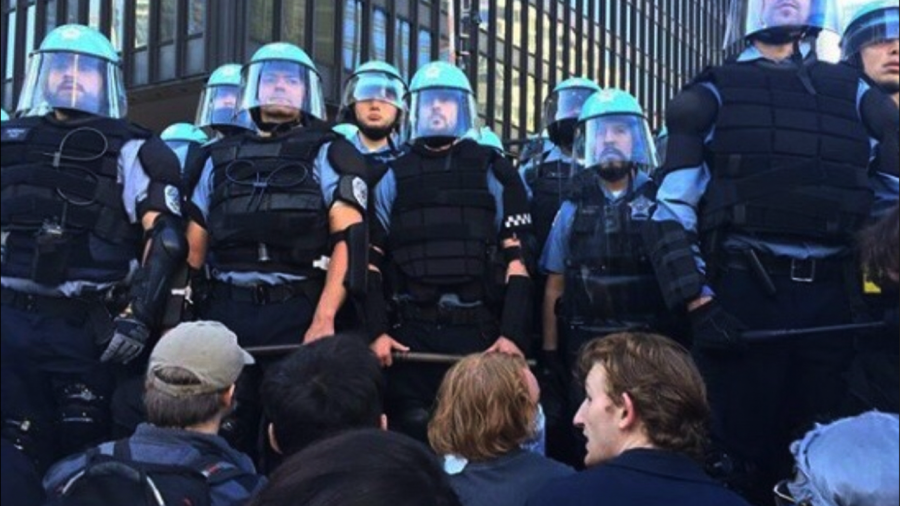 When Chicago protestors shattered the eerie quiet of the pandemic last weekend with cries for basic human rights, police responded with riot shields. The shields appeared to create a symbolic divide between police and populace; they added a quarter-inch of polycarbonate glass to a social divide that already felt insurmountable. But their purpose extended far beyond symbolism: police thrust riot shields as weapons into crowds of protestors, many of whom, allegedly, they would later drag away and beat. Mr. Kanai, an Upper School English teacher, was one member of those crowds. He spent Saturday night in a jail cell.

The afternoon started peacefully, said Kanai. “The organizers made it clear before it started that this was a peaceful protest. Violence or destructive acts would not be tolerated at all.”

Four-to-five-thousand demonstrators marched in a loop near Trump Tower without a significant police presence. They chanted, kneeled, and held moments of silence for George Floyd, Ahmaud Arbery, Breonna Taylor, and the dozens of others. “But that,” said Kanai, “was the quiet before the storm.”

“We moved onto a bridge, where police played a pre-recorded message on a loudspeaker that said, ‘You are breaking the law, if you do not leave the premises you may be subject to physical removal or tear gas.’ There was no face-to-face discussion; no one said ‘we understand your grievances.’ The officers were stone-faced,” he said.

Then, without warning, the police began to plow their shields into the protestors. Kanai, stuck at the front of the group of demonstrators, was crushed between both sides. Other protestors, presumably overwhelmed by the claustrophobia-inducing mayhem, vomited or screamed. This was the moment that Kanai later described in an Instagram post as when “a peaceful protest turned into a bloody battle.”

A battle it was indeed. On Sunday alone, Chicagoans made 65,000 9-1-1 calls, and the Chicago Police Department arrested at least 699 individuals, NBC Chicago reports. The majority of the demonstrations, like Kanai’s, were peaceful; others involved looting and arson. But violent or not, many argue the severity of the destruction paled in comparison to the continued exploitation of black Americans. The NAACP, for example, published a statement on Sunday referring to the Chicago protests as a “moment of reckoning for our nation’s conscience.”

“It was a hellacious warzone,” Kanai continued. “I saw a female protestor being dragged away by her hair. One police officer had his knee on the neck of a protestor … people were swarmed by officers and cracked over their heads with nightsticks. No one even really resisted.”

Then, Kanai himself was arrested, as part of a campaign of “indiscriminate snatching … meant to weaken the morale of protestors.”

“An officer held his club like a lacrosse stick and cross-checked me in the chest. He stuck his foot out, tripped me, and I fell on the ground. A couple officers came by and began hitting me with their sticks while I was in fetal position,” he said.

In the chaos, someone stripped away Kanai’s backpack, which contained his two cameras–including the one he uses as a webcam to teach his remote-learning English classes. Then, after four hours waiting in the shadow of the Trump Tower, he was carted away to a jail on the Northwest Side.

Mr. Kanai is revered by the Latin community for his engaging teaching style and the trust he places in his students. “He’s a great listener,” said Shreya Wojno, a rising junior and student of Kanai’s. “He really cares about his kids; he always asks us how we’re feeling and makes time in class to talk about heavy topics. He makes class relevant and relatable.”

Luca Tricoci, a rising sophomore, similarly said, “Mr. Kanai is a very understanding and amazing teacher, who I will be sure to remember as an incredible person and teacher for years on. He is outstanding.”

But although Kanai’s eye for social justice is commended by those close to him, he emphasized that students prioritize their personal wellbeing before becoming physically involved: “To any student wanting to attend a protest, I’d say safety has to be the first and foremost concern … I know that there are a lot of students who want to have their voices heard, to support black lives. But there is a risk–we can’t downplay it. There are ways to help outside of protesting physically … like donating to the Chicago Community Bond Fund, or the Chicago Freedom School.”

Head of School Kirk Greer and Student Government issued a joint statement on Monday, further explaining how Latin students can safely involve themselves in social change. “As a Latin student,” wrote Greer, “you have the power to understand and the responsibility to shape our shared history as it unfolds. We ask you to make three commitments: Be informed … Be active … Be safe.”

Kanai was let go, without any charges whatsoever, at around 9:00 on Sunday morning.

“I am not endorsing nor condemning rioting,” Kanai told his Instagram followers upon his release. “That is a separate conversation. What I am condemning, in no uncertain terms, is the vile police response to this demonstration. This was callous thuggery worthy of an authoritarian regime.”