What to Expect from Fall’s Return to School 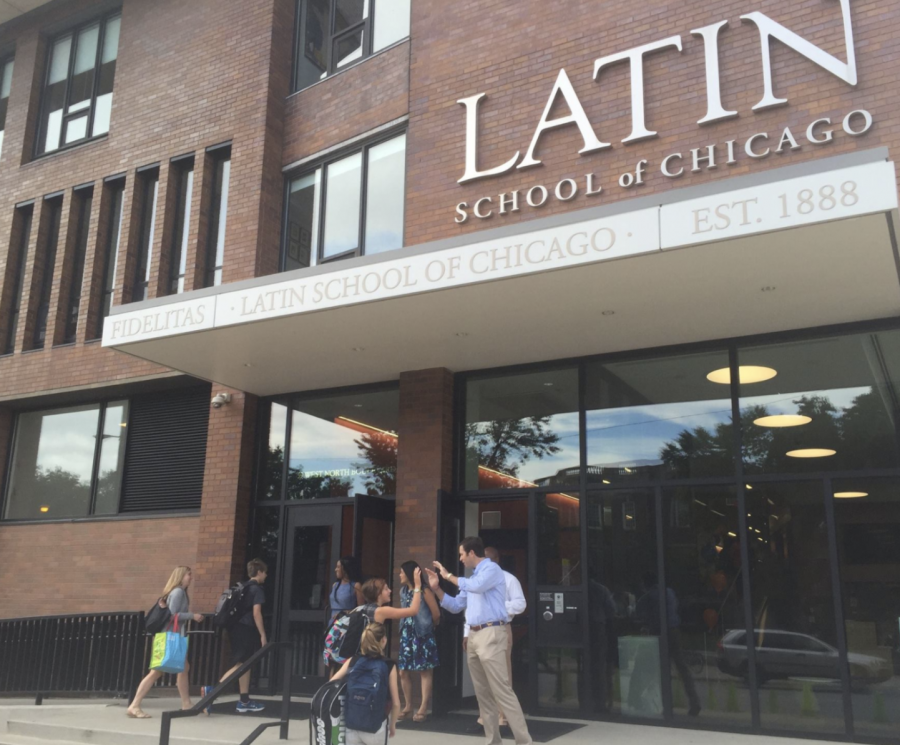 The first day back will look different than it did four years ago.

Latin 2020-2021: expect buffalo wings to scent classrooms, possible continuation of math classes in pajama pants, and a potential new nostalgia for the field hockey season that used to be.

While Latin students ponder when they might resume schooling in person, the equally perplexing question of how Latin administration will choose to conduct learning is one that requires careful thought, planning, and leaps of faith. One thing seems certain: students are unlikely to hear seniors complain about congregating freshmen in the locker bays this coming fall.

The Journal of the American Medical Association has reported the death rate for people aged 40 to 60 diagnosed with COVID-19 at 0.6 – 3%. This age range includes many of Latin’s parents, faculty, and staff, so it is important that if and when in-person learning resumes, the appropriate precautions are taken to ensure the safety of the community.

Mr. Greer, the director of the upper school at Latin, explained that as he and the rest of the senior administrative team begin to turn their attention to the fall, possible safety management plans vary in levels of restriction. At best, students will be returning to school in the fall, with minor limitations on close contacts, possibly including the use of masks, as well as temperature checks upon entry into the buildings. However, with minimal guidance so far from the state, it is difficult to say whether or not the school will be allowed this optimal freedom. A second potential arrangement, with limits on maximum student capacity, becomes more complex.

National Public Radio has reported on schools around the world that have reopened their doors to students, though with many changes to daily routines (npr.org). Some schools in Denmark, for example, settled on classes of 12 or fewer, with staggered schedules. Similarly, Latin’s headmaster Mr. Dunn notes, “We may have to design a hybrid plan of remote and in-person learning where some kids are at home on certain days while others are at school.” Denmark has also implemented systems where teachers rotate between classes, while small groups of students remain in few locations. The purpose of these interventions is to limit the number of exposures experienced by each individual, thereby limiting spread of virus to large populations. For Latin’s lower school, this schedule is similar to one which already exists. However in the upper school, students constantly move from group to group, exposing each individual to large numbers of the total upper school population. The question then becomes, “How can we adapt our existing schedule into one that could work at limited capacity?” says Mr. Greer. “One solution could consist of teachers offering smaller in-person sessions with one half of the class at one time, and the other half at another time, where the teacher teaches the class twice.” This would allow for remote class discussions with a larger group, while limiting social contact in school.

This does not, however, account for the reality that each of those students, from the small initial class, might then move to separate small groups in other classrooms. In this way, while one student might only sit in a classroom of ten students at a time, by the time they finish their day, they might have sat in seven separate classes, each with a different group of ten students, who have all followed a similar pattern.

Norway and Israel have decided to start in person learning with the youngest children first. The head of the New York City teachers’ union, the United Federation of Teachers, Michael Mulgrew, agrees with this decision, and says, “Those students are normally with one main classroom teacher, meaning fewer changes to existing scheduling and staffing” (npr.org).  In contrast, so far, Latin’s senior administrative team has planned for all divisions to return at the same time.

The Center for Disease Control and Prevention recommends that schools in the U.S. “ensure that student and staff groupings are as static as possible.” At the same time, Latin’s administrative team is “committed to building community time into the schedule” so that clubs and affinities can resume in-person meetings, according to Mr. Greer. The final solution will need to balance disease prevalence, public safety, and Latin’s values of community and belonging.

Schools around the world are considering variations in traditional school calendars. The school year could be extended to account for already missed days and for potential gaps in the school year to come, according to Maria Litvinova, a researcher at the Institute for Scientific Interchange in Turin, Italy (npr.org). Although Latin plans to open its doors to students again in the fall, the third category of rescheduling might be to continue remote learning. In that case, a distinct remote learning schedule, with respect to students’ course requests, would be created in order to optimize the community’s productivity and connection.

The CDC also suggests that students not mix in large groups, meaning no assemblies, sports events, clubs, or affinities. Mr. Greer notes, “Even within the ideal circumstance where we can all be together in the fall, we should expect that it is unlikely for 500 of us to meet in the theater or 250 of us to eat lunch in the learning commons right away.” Handcut foods has met with the facilities team to rethink meals; maybe lunch will be eaten in classrooms, rather than in the learning commons. Restrictions on sports are still to be determined, and it is likely that the school will see changes, especially regarding contact sports. Mr Lim, the Director of Athletics at Latin, explained that returning to school with limitations on contact would be very difficult for Latin’s sports teams. He commented that “practices and games may have to be modified or canceled” to fit the guidelines of the state and the Independant High School Association. Mr. Lim does not anticipate any changes in graduation requirements for athletics, given that the athletics department “will be asking our athletes to follow a regime of fitness and workouts” in the event that sports do not resume as planned. These drills would require minimal space and little to no equipment, as coaches should not expect all athletes to have the same means to work with at home.

Still, “the whole point of being back in the building again would be to have community that we are all missing”  Mr. Greer explained. While Latin must wait to hear from the state regarding contact restrictions, the goal is to connect again as a community in person.  Mr. Dunn explained that “this will be a learning experience for the Latin School of Chicago, and these learning experiences make us all stronger.”  Expect the administration to reach out to students about which scheduling systems are preferred, if and when Latin reopens its doors.

Regardless of the particulars, Latin students can expect meaningful changes from their common routines. However the cards fall, the community will work together to uphold this year’s theme of “together,” understanding that Zoom may be the conduit through which they support and appreciate one other.