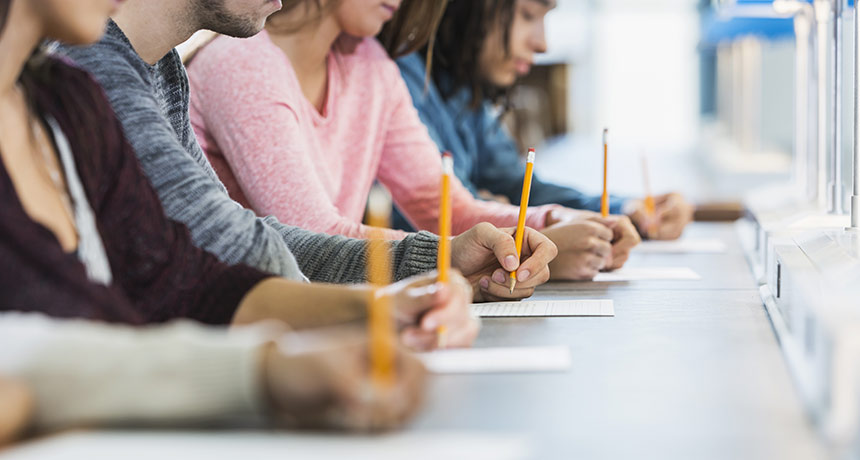 Academic integrity is an integral element of almost any high school in the world. For some students, a lack thereof is a way to stay afloat, and for others, it’s a way to sleep a couple extra hours. But what about the smaller acts such as unauthorized group work or disclosing the nature of an assessment to another student? While it may seem that we fill out a new survey every Day 1 of the cycle during advisory, the data from the Independent School Health Check (ISHC) survey we took in November was especially telling. According to Ms. Horvath, Latin’s Assistant Head of Schools, “it compares us with national independent schools for this age group.” The following are statistics the survey collected on academic integrity at the school:

Similar or lower was the general trend, aside from the third one. “I wouldn’t say it’s a full-scale crisis of any sort, but it is something that we’ve started to take a look at, and with ISHC data, with most of the academic integrity based questions, we’re falling about similar to national statistics,” says Ms. Horvath.
Combating the issue of cheating has been an ever-evolving process for the administration. “I’d say that over the last five to six years there has been much more of an effort to make sure that teachers aren’t dealing with possible cheating or academic integrity violations in isolation from one another so that there’s a little more consistency and then sharing when there are concerns with the dean so that the dean can understand if there’s any pattern of behavior, because that would adjust how the school responds,” says Head of the Upper School, Mr. Greer. Furthermore, Greer emphasizes that “We want to make sure that our values are clear and having a firmer response in signaling how much this really does matter. I think that’s trying to come out with stronger consequences than we maybe have been in the past,” says Mr. Greer.
To manifest these goals, an academic team has been formed. “Our academic team meets monthly, typically, and that is our department chairs and other people that are a part of our different groups,” says Ms. Horvath. Still in their beginning stages, “one of Mr. Greer’s goals for when we return from spring break is to start thinking about our academic integrity policy – so developing some handbook language, and organizing parent and student orientation programming.” says Ms. Horvath.
Furthermore, there is an ambiguous situation that many students find themselves in: a class takes an assessment earlier in the day, and another class takes the same assessment later. As many know, this situation usually leads to communication over the nature of the assessment from class A to class B. While the administration doesn’t hold any statistical trend to this issue, Mr. Greer does indicate that it’s becoming an increasing concern among faculty. “I bet 80% of students would think, ‘well that’s just what we do, that’s how we survive’’’ says Mr. Greer. To combat the issue, Mr. Greer believes “part of it is making the claim that disclosing the nature of an assessment to a student that hasn’t taken it yet is an academic integrity violation, but then there are also things that faculty need to do too and its thinking about ‘what can we tighten up?’” According to biology teacher Ms. Kutschke, the science department has already taken steps to implement a method of prevention, “we’ve come up with a variety of questions to test the same learning objectives, and maybe I’ll give two of my classes an assessment and one a different one.”
Technology, too, has led to changes in violating academic integrity on the part of students, as well as preventing or combatting academic integrity on the part of adults. “I don’t know statistically if increased access to technology has increased the level of cheating, but I would assume that the access certainly creates that opportunity to get information,” says Mr. Greer. Ms. Kutschke acknowledges that “anything you want to find online if you want to find an answer to a case study, or whatever the case may be, you will find it online. So I think that that’s just a problem too because there’s so much access if you know the right questions to ask.” But Ms. Horvath partly dissents: “I think in some ways, technology has increased our ability to be aware when academic integrity issues are happening just because of so many different tools that are used now in terms of academic integrity that are online,” such as Turnitin.com.
It would be naive to discuss how academic integrity is dealt with at an elite independent school without covering the question of equity. While many proclaim that Latin, and perhaps all independent schools for that matter, treat situations of academic dishonesty differently depending on how much money and sway their family has at the school, this is not the case. “I would say we’re very thoughtful and equitable in the way we handle every academic integrity. I feel that we don’t consider who someone’s family is or anything, we consider the details of what we’re being presented with, and our deans work really closely with the teacher and the student and the family to navigate those situations and to see what’s in front of us and to go from there,” says Ms. Horvath.
Finally, Mr. Greer speaks to what he believes is the root cause of those smaller and more ambiguous incidents of academic integrity: a high-stress environment. “I think very rarely do people set out intentionally to violate academic integrity. I think everyone is capable of it, no one is immune from it, I think it’s very contextual, it’s ‘I’m having a really really intense week, so I feel the need to cut this corner.’”
So for those wondering about how Latin deals with incidents of cheating/prevents cheating, how it compares to other schools, and how prevalent cheating is at Latin, there you have it—raw and unfiltered from the administration themselves. Of course, confidentiality leaves room for speculation, but hopefully Latin is concentrating their focus helping combat academic dishonesty.