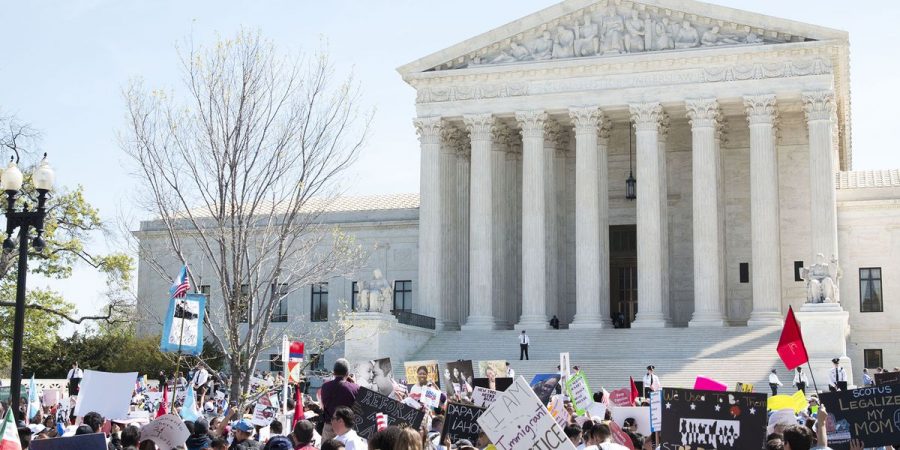 by Jay Doherty, Staff Reporter
On June 15, 2012, then United States President Barack Obama introduced Deferred Action for Childhood Arrivals (DACA), an immigration policy signed into law by executive action. DACA gives some undocumented individuals brought to the U.S. as children the opportunity to receive a two-year period of deferred action from deportation and official eligibility for a work permit.
When President Obama announced DACA, he referred to those migrating to the United States as young children that grow up to be “Americans in their heart, in their minds, in every single way but one: on paper.” DACA allows eligible individuals who do not present a risk to national security or public safety to request temporary relief from deportation proceedings and apply for work authorization.
Just two months after that announcement, the U.S. Citizen and Immigration Services began accepting hundreds of thousands of applications from those eligible to receive the relief DACA offered. The day before USCIS allowed applications, the Pew Research Center released a report stating that nearly 2 million individuals were eligible to enroll in the program. Four years later, by June of 2016, DACA had received a staggering 844,931 applications, 88% of which were approved, 7% denied, and 5% placed in pending status. A tremendous number of people came to depend on the program.
In 2014, the Obama Administration expressed intentions of expanding the program to include immigrants older than the age range the program originally intended to serve, perhaps the parents of young children already being protected. Seeing this change as potentially unconstitutional, 26 Republican-led states sued the Obama Administration for proposing what many of them viewed as an overbearing and unnecessary measure. The states won the Texas-based case months later.
Around the time of those states’ victory, presidential candidate Donald Trump announced his run for office and gained a following for, among many things, his outspoken stance against illegal immigration. When Trump became President in January of 2017, one of his first acts was appointing the now-former U.S. Attorney General Jeff Sessions, a key figure in the legal mission to revoke DACA.
On September 5, 2017, Sessions announced, “The program known as DACA that was effectuated under the Obama Administration is being rescinded.” After giving a brief summary of why the program was implemented by Obama in the first place, Sessions explained his reasoning for suggesting Homeland Security terminate the program. “The executive branch through DACA deliberately sought to achieve what the legislative branch specifically refused to authorize” he stated.
While the plan set out by Obama was not intended to pave a “pathway to citizenship,” the legal battle escalated further as the orders given by Trump and delivered by Sessions were blocked by lower courts.
The legal battle continues today but likely not for much longer. The DACA case rose to the Supreme Court. The nine Supreme Court Justices, two of whom are Trump appointees, recently heard plaintiffs’ arguments as to why DACA is constitutional.
The Justices continue deliberating the legality of each argument and have yet to release a decision which would determine the future–or potential lack thereof–of DACA. If the court rules DACA could continue, the program will likely stay the same with little to no changes in policy or upkeep. However, if the court were to see DACA as unconstitutional, hundreds of thousands of DACA recipients would likely lose their granted benefits, although the procedural timeline of these potential events remains unclear.
Legal experts say the logistics of deporting people on such a large scale is quite difficult. In fact, an NBC News legal pundit suggested that “if Trump prevails, the administration is likely to impose a gradual shutdown of DACA similar to what it tried before the phase-out was blocked by lower courts.”
While DACA’s future is unpredictable, the legal and moral issues surrounding the case are a sensitive subject in the Latin community. Junior Sebastian Valenzuela, a member of the Latin American Student Organization said, “No child who has grown up in and lived their whole lives in the U.S. should be forced to ‘return’ to a nation they’ve never called home. It is our responsibility as fellow Americans to stand up for our own and make it clear to those in charge that as a nation founded by and grown by immigrants, they are welcome.”
Latin sophomore Joseph Schwister cautions that no matter the ruling, DACA will still be under threat. He said, “The Supreme Court elevation is irrelevant. Even if the court rules to allow DACA again, the Trump administration will terminate it on new legal reasoning.” While the try, try again legal tactic Schwister referenced is not unheard of, it is uncommon to see it play out in the Supreme Court.
While other students expressed support for DACA, a conservative student who requested to remain anonymous said, “Immigration is a tough choice but the law is the law. I think it is ultimately the Supreme Court’s decision but I am opposed to the executive action taken by the Obama administration in the first place.”
Immigration is one of many topics of law where legal and moral questions intersect, and the Supreme Court’s decision will set an important historical precedent. But no matter their legal situation, all people deserve a safe home.