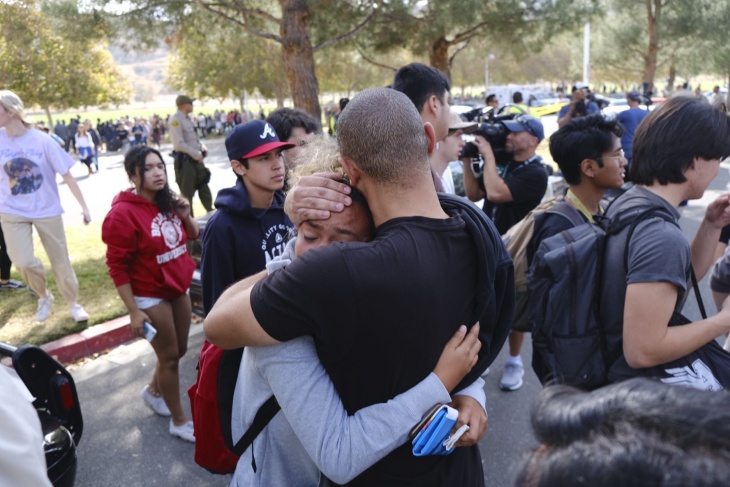 by Charlie Williams, Staff Reporter
At 7:30 a.m. on November 14th, the city of Santa Clarita, California was filled with sirens. In this town 30 miles north of Los Angeles, students were seen flooding out of Saugus High School and lining up on the streets searching for their parents, because of 16 seconds of horror. All this horror stemmed from a 16-year-old boy, Nathaniel Berhow, who put a .45-caliber pistol in his backpack before coming to school. That day, the teen opened fire on students in the quad, killing two and severely injuring three more before committing suicide.
Two of Berhow’s victims, Grace Anna Muehlberger, a 16-year-old girl who was known for her bubbly spirit and Dominic Blackwell, a 14-year-old boy who was called bright, charismatic, and compassionate, sadly passed away. The other two victims were a 14-year-old girl and a 15-year-old girl who are both in recovery. Sheriff Alex Villanueva said at a news conference after finding out that the second student had died, “I hate to have Saugus be added to the names of Columbine, Parkland, Sandy Hook, but it’s a reality that affects us throughout the nation, something we’re going to have to deal with.”

What made this tragedy particularly unusual was that the shooter did not fit the usual suspect boxes. Berhow, a 16-year-old Asian teen, was celebrating his birthday on November 14th. According to the County Sheriff, Alex Villanueva, “He wasn’t a loner. Wasn’t socially awkward. Was involved in student activities. Student-athlete. This is kind of out of the blue, shocking pretty much to everyone who knew him. And there is no history at that address to indicate that there were any issues at home prior to the shooting.”. Because of Berhow’s suicide, his motives remain a mystery. Paul Delacourt, assistant director of the Los Angeles FBI field office, also explained, “There is no reason to believe the suspect was acting on behalf of any other group or ideology or that there were any co-conspirators.” The suspect’s unusual profile has left many with questions about why Berhow decided to do what he did.
Another unusual aspect of the tragedy is the lack of coverage on the event. Unlike previous mass-shootings, the Saugus High School shooting has not reignited national debate concerning gun policies and school safety. On the lack of publicity, senior Lily Weaver said, “The lack of media attention on the shooting in California last week alarms me, as it sends the message that mass shootings in the United States are normal or expected. We must continuously question why there is unequal reporting on specific events, especially tragedies like Santa Clarita. I feel as though gun reform and regulation is seen as a partisan issue, but in reality, it is a public safety issue.” When asked about her reaction to the amount of media coverage on the shooting, sophomore Sophia Matchett responded saying, “I feel like we’ve become a little desensitized to tragic events like this, as I think with Parkland, and Sandy Hook, etc. there was more outrage from the public and I didn’t feel that people responded in the same way, this time. I think it happens so often we have kind of stopped caring or being affected by it.” Sophomore Claire Lee-Zacheis stated, “I feel like the event was beyond tragic. It feels like every other week we hear about a school shooting, but also, there are so many that we don’t hear about, which is incredibly unfortunate. Additionally, at this point, there have been so many that we’re becoming more and more desensitized to it-we all understand how devastating they are, but we don’t fully feel it until they either hit somewhere close to us.”
This desensitization is likely, at least in part, due to the media’s portrayal of such events. Sophomore Luis Soto said, “At this day and age, I feel like media continues to control us and we no longer have the position to control what is broadcast.” In choosing what to broadcast, the media has the power to shape the narrative around national tragedies. Junior Darius Nabers said that when it comes to news agencies, “Mass shootings are heavily reported, talked about, televised, and the main topic of focus for a few days but after that they vanish from headlines, and I feel like it was the same for the shooting in California.”
Although many in our Latin community are aware of what is happening around the nation, when asked about their reactions to the amount of reporting on the shooting, many like sophomore Gavin Snyder said, “I think I read one article about it.” and others like freshman Anna Hayes said, “I didn’t even know there was a shooting, which is very concerning to me.”
So what does this mean for the nation? Are younger generations not paying attention? Or are mass-shootings no longer newsworthy? Either way, both questions point to the same pattern arising in the United States. As sophomore Peter Cahillane explained, “It seems like society is becoming desensitized to this kind of violence and it becomes less and less important each time a tragedy like this happens.”